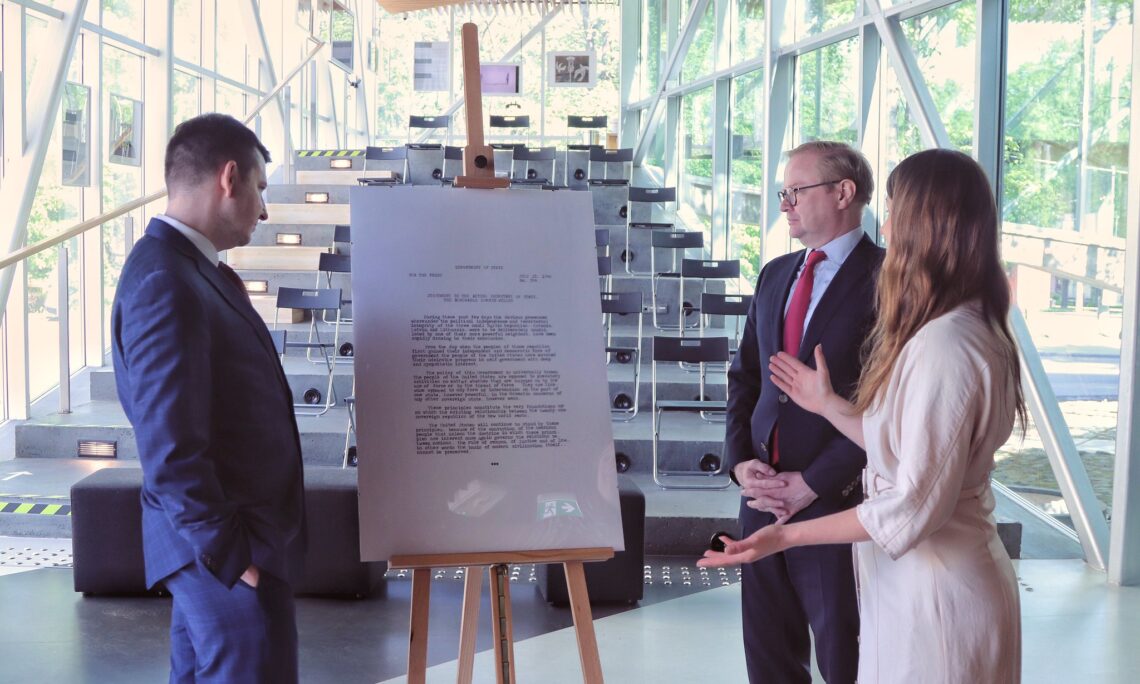 U.S. Chargé d’Affaires Brian Roraff and Jonatan Vseviov, Secretary General of the Estonian Ministry of Foreign Affairs Secretary General and former Estonian Ambassador to the United States, visited the opening of Vabamu’s new temporary exhibition “US Declaration in Support of Estonian Independence” on June 2, 2021. The exhibit tells the story of the 1940 Welles Declaration, in which the United States refused to recognize the illegal Soviet occupation of Estonia. Through animation and portraits, the exhibit brings alive the story behind this pivotal document and its role in Estonia’s path to restore its independence.

“The Welles Declaration is a foundational document in the history of U.S.-Estonian relations,” Chargé d’Affaires Brian Roraff said. “It established an international framework for the survival of the Baltic states, and demonstrated the United States’ firm support of the sovereignty, territorial integrity, and political independence of Estonia. These principles continue as the basis of our relationship today.”

“I want to thank Vabamu and the team from the Estonian Academy of Arts for their amazing work to tell the story of the Welles Declaration and its important place in the strong friendship between the United States and Estonia.”

The Vabamu exhibit tells the story behind the Welles Declaration with the aid of animations and portraits created in cooperation with the Estonian Academy of Arts. Through four stories, it brings to life the U.S. policy of non-recognition and shows how it helped keep alive the idea of the independence of the Baltic States during World War II, the Cold War, and their path to restore independence. The exhibit, which was funded by the U.S. Embassy in Estonia, is now open at Vabamu and will last until October 23.

For all photos of Chargé d’Affaires Roraff and Ambassador Vseviov’s visit to Vabamu, visit https://flic.kr/s/aHsmVTNU1Z.