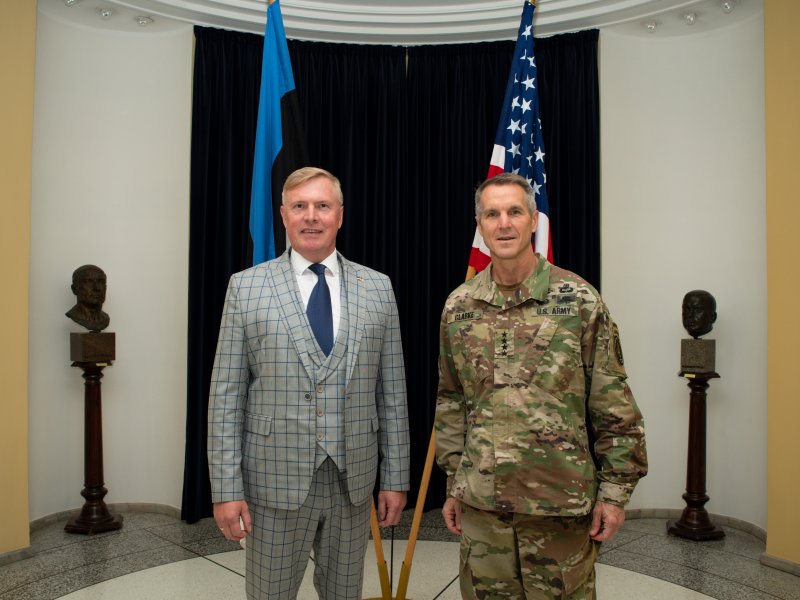 Photo by Estonian Ministry of Defense

The senior leaders discussed how Estonia and the United States could work together through NATO to address security concerns in the Baltic region.

“I want to thank Defense Minister Laanet and Defense Chief Lt. Gen. Herem for welcoming us and providing an opportunity to discuss ways we can continue improving how we defend our respective countries,” Clarke said. “Estonia is a key partner in the region and plays an important readiness role, whether that involves supporting troops for training, hosting NATO’s Enhanced Air Policing mission or on cyber defense. Our relationship with Estonia is invaluable. They are a strong U.S. and NATO ally, and our work together improves vital interoperability that supports a free and peaceful Europe.”

Minister of Defense Kalle Laanet commented, “Estonian and US special forces share a long and close cooperation. The US special operation forces staff element that has been in Estonia since January of this year, enables us to deepen and further develop our cooperation, among other activities, to organize joint exercises. Developing the interoperability of special operation forces will significantly strengthen our deterrence and defense posture.”

Clarke’s visit underscores the United States’ commitment to security partnerships in Estonia and the Baltic region. The United States has provided and continues executing over $240 million in security assistance programs to Estonia funded between 2015 and 2020. In 2021, U.S. funding for security assistance to Estonia will include more than $50 million for integrated air and missile defense equipment and training; aircraft recovery and firefighting equipment and training; communications networks and radios; intelligence, surveillance, and reconnaissance equipment; and shore-based maritime domain awareness systems. The United States and Estonia also jointly participate in multiple exercises and military-to-military engagements each year.