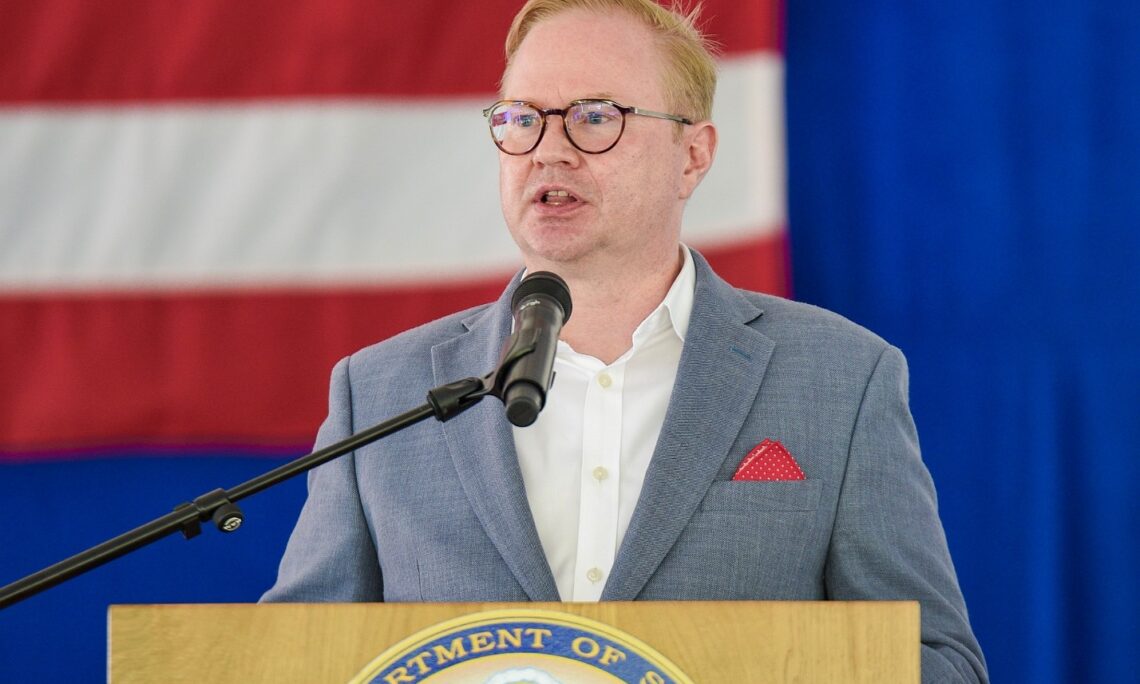 It is very nice to see everyone.  Dear friends, ministers, and excellencies.  I’d like to begin today by saying “Thank you.”  Thank you to all of our guests who have joined us to celebrate the United States’ Independence Day.

Please allow me to take a minute to also thank to the Botanic Garden and its director, Urve Sinijärv.  Urve and the Botanic Garden graciously provided this beautiful location for us to celebrate the United States’ 245th birthday.  The Garden is actually hosting the embassy all month long as part of its “Embassy of the Plant Kingdom” series.

So today, we officially open “America Month” at the Botanic Garden.  The U.S. Embassy is proudly sharing various elements of our country’s biological and cultural diversity. As part of that endeavor, we are excited to present an exhibition called “Pollination Investigation!”

The exhibition was developed by the Smithsonian Garden in Washington D.C. and is presented in English, Estonian, and Russian.  It explores the unique relationship between pollinators and plants and runs through July 31. So, we are extremely grateful that the Botanic Garden offered their venue to highlight that topic.

For those of you who have attended one of our July 4th celebrations in the past, you’ll notice that this one is a bit different.  First of all, it is much smaller. We would have loved to invite every single one of our friends, colleagues, and partners, but we are still living in a world in which gathering in our traditional numbers isn’t entirely advisable. And so, we make do, holding a smaller in-person event.  But we also remember those we wish could be here.  We will be sending them a small token of friendship along with an invitation to visit America Month in the Botanic Gardens in July.

Although the festivities may be on a more modest scale, we at the U.S. Embassy nevertheless feel grateful.  We are grateful to hold this celebration at all.  We are grateful as guests of Estonia, which has managed to weather the pandemic comparatively well.  And we are grateful for declaring our independence 245 years ago, which brings us here today.  In 1776, the signing of our Declaration of Independence was marked with band music and concerts across our thirteen states.  I am happy to say we will follow that tradition today with a performance by the U.S. Army Europe Band.

Technically, our Independence Day commemorates our nation’s birth with the signing of the Declaration of Independence in 1776.  But of course, at its core, the Fourth of July is an annual celebration of the principles of freedom and independence.

For myself and the Americans at the U.S. Embassy, we are proud of our freedom and independence.  We are proud of how our democracy has grown and improved since 1776.  But we also know it has faced difficult tests throughout our history, and that we will face difficult tests in the future as we continually strive for what our Constitution called “a more perfect Union.”

While we are proud, sometimes, however, we take it for granted that our freedom and independence will always be there.  Before I arrived to Estonia, I spoke with many Americans who served here, and a common theme in their experience was clear: their admiration that Estonians know that freedom is not permanent, that it can be taken away, and that it must be constantly defended.

I remember my first lesson in how Estonia was different this way, when soon after my family’s arrival in 2019, my six-year-old daughter announced at dinner that she started learning Estonian at school.  As proud parents, my wife and I asked her then to say something in Estonian.  She said: “Vabadus!”  My wife and I realized then that Estonia was a special place if the first word she brought home was “freedom.”

More recently I was honored to observe the Victory Day celebrations in Paide.  General Ühtegi spoke eloquently about how Estonian grandparents who had lived in independent Estonia kept alive the idea of an independent Estonia, and how his generation, inspired by their grandparents, took back Estonia’s freedom and independence thirty years ago.  We then watched the parade of the Kaitseliit.  Marching past the President and Prime Minister were Estonians from all over the country, men and women, old and young, a military force the likes of which I had never seen before.  They were the faces of Estonians from all walks of life ready to defend Estonian freedom.

A month earlier in May, the United States and Estonia conducted the combined joint exercise Swift Response.  A key element of that exercise was the U.S. 82nd Airborne Division parachuting into Estonia direct from the United States.  It was amazing.  On the morning May 7, the paratroopers boarded airplanes at Fort Bragg in North Carolina in 25 degree weather.  After an 11-hour flight, they parachuted into Estonia where it was 0 degrees.  Their Estonian training partners that night were from the Estonian Defense League, who met them in the woods outside of Nurmsi in central Estonia.  Thus, those in the Kaitseliit who marched in Paide last week hopefully know the United States stands with Estonia, and is not as far away as it seems.

As we reflect on our security relationship, let us remember today the life of Donald Rumsfeld, our two-time Secretary of Defense, who passed away yesterday.  In his second stint as Secretary, he was a strong believer of Estonia’s place in NATO and was there when Estonia joined in 2004.  Estonia and the six other nations that joined NATO that year earned it by their own efforts.  But I think we all can acknowledge that he was a friend of Estonia and Estonia benefited from his support.

We are proud that U.S. Estonia cooperation continued through the pandemic, but we must admit that the last year has been a challenge for all of us. While security forms the core of our relationship, our relations are much broader than any single sector.

At the Embassy, we missed engaging all of Estonia.  We missed hosting our American Movie Nights where Embassy staff shared American culture through film.  We missed the packed theatres of the Black Nights Film Festival, which we are proud to help support.  We also missed our exchange programs.  In 2019 the U.S. Embassy sent nearly 500 Estonian students and professional exchange participants to America.

We are not done with the COVID pandemic yet, but let us hope we are taking the first steps to a new normal.  I know we in the Embassy want to get back on the road and travel to Viljandi and visit its Culture Academy.  We want to go to Narva during the Narva Soap Box Derby, and to travel to Tartu and its great university, and hopefully go to Paide for the Estonian Opinion Festival.

I look forward to sending out the next cohort of Estonian Fulbright Students and Scholars to deepen academic cooperation between our countries. And finally, I am eager to see our American Corners back in action and watching how their patrons—children and adults alike—connect with U.S. culture and the English language.

Let me conclude with a toast to the past year and to future. Let us celebrate together.  To America’s 245th birthday.

To friendship and freedom;

To more engagement and less COVID;

and to the strong and enduring partnership of the United States of America and the Republic of Estonia. Terviseks! Cheers!