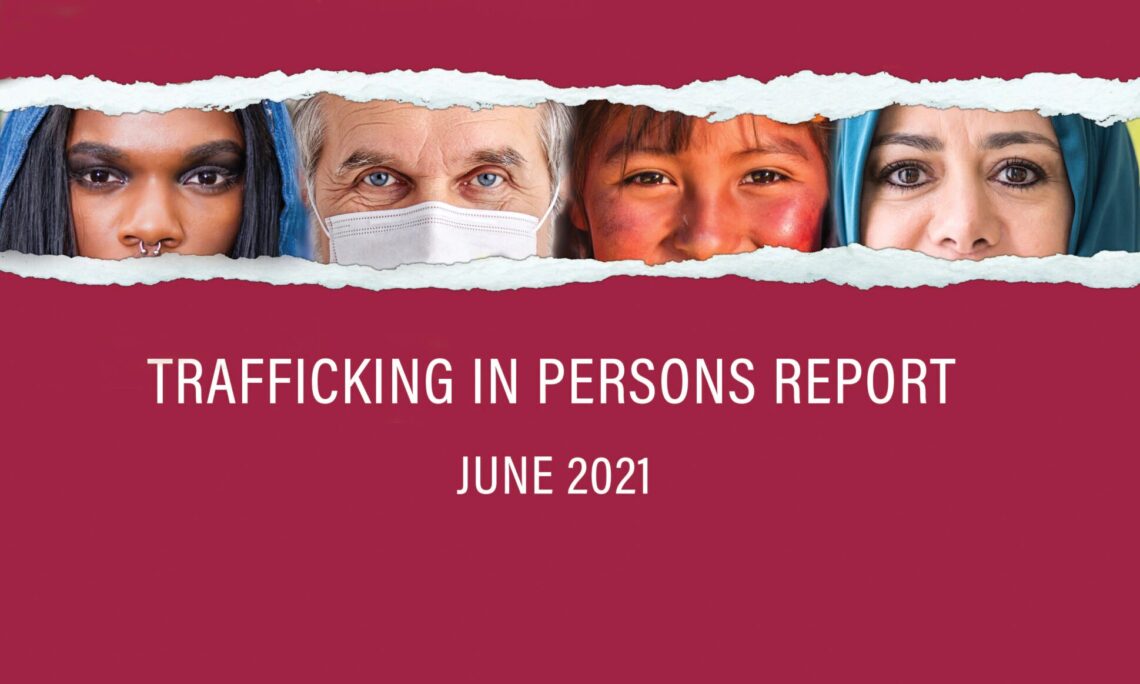 The Government of Estonia fully meets the minimum standards for the elimination of trafficking. The government continued to demonstrate serious and sustained efforts during the reporting period, considering the impact of the COVID-19 pandemic, if any, on its anti-trafficking capacity; therefore Estonia remained on Tier 1. These efforts included investigating and prosecuting more trafficking cases and convicting more traffickers under Section 133 of the penal code. In addition, the government issued a regulation granting third-country nationals temporary stay; extended the permissible length of short-term foreign worker employment; and amended the Aliens Act to enable foreigners with short-term work visas in specified industries to continue working past the expiration of their visas. Furthermore, the government increased funding for victims’ support services, courts ordered traffickers to pay restitution to trafficking victims, and the Police and Border Guard implemented a tool to identify trafficking indicators among asylum-seekers. Although the government meets the minimum standards, only 43 percent of convicted traffickers received sufficiently stringent sentences, and authorities identified fewer trafficking victims. Moreover, authorities struggled to quantify the number of child trafficking victims involved in criminal cases.

Sentence convicted traffickers to significant prison terms, and ensure they serve those sentences in practice. • Proactively identify potential child trafficking victims and report the number of child trafficking victims involved in criminal cases. • Increase efforts to investigate, prosecute, and convict traffickers under the anti-trafficking provision of the penal code. • Improve sentencing norms by sensitizing judges to the severity of trafficking crimes and the full range of penalties available. • Expand efforts to train law enforcement, prosecutors, judges, and front-line personnel to understand different forms of trafficking. • Establish a specialized unit to collect and verify information on trafficking-related crimes and allocate funding for investigations. • Broaden public awareness efforts to educate at-risk communities, such as migrant workers, on the risks of trafficking. • Develop, publish, and implement a national action plan for 2021.

The government maintained law enforcement efforts. Sections 133, 133¹, and 175 of the penal code criminalized sex trafficking and labor trafficking. Section 133 (trafficking in human beings) criminalized placing a person in a situation of exploitation through force, fraud, or coercion, and prescribed penalties of between one and seven years’ imprisonment for offenses involving an adult victim, and three to 15 years’ imprisonment for those involving a child victim. Section 133¹ (support to human trafficking) separately criminalized the transportation, delivery, escorting, acceptance, concealment, or accommodation of an individual into a situation of exploitation through force, fraud, or coercion, and prescribed penalties of up to five years’ imprisonment for offenses involving an adult victim, and between two and 10 years’ imprisonment for those involving a child victim. Section 175 (human trafficking in order to take advantage of minors) criminalized inducing a child to engage in a criminal offense, begging, prostitution, or the production of pornography without requiring a demonstration of force, fraud, or coercion and prescribed penalties of two to 10 years’ imprisonment. The penalties under Sections 133, 133¹ and 175 were sufficiently stringent and, with respect to sex trafficking, commensurate with the penalties prescribed for other serious crimes, such as rape.Overextension of personnel remained the government’s primary constraint, limiting specialization and knowledge of trafficking; police expressed the need to establish a centralized unit that would collect and verify information on trafficking-related crimes and create a separate budget line for investigation efforts. During the reporting period, police investigated nine new cases (all labor trafficking) under Section 133, an increase from five in 2019. Authorities prosecuted 15 cases, an increase from seven in 2019, and courts convicted 14 traffickers (two labor trafficking, 12 sex trafficking), compared with 12 in 2019. Of the 14 convicted traffickers, only six received prison terms (43 percent), ranging from three to nine years; the remaining received probation, which did not deter the crime or adequately reflect the nature of the offense. Similarly, in 2019, only four of 11 convicted traffickers received prison sentences (36 percent). As in previous years, government data regarding Section 175 did not differentiate between cases exclusively related to trafficking or cases related to other crimes, such as child pornography. Under Section 175, authorities investigated 26 cases (all sex trafficking), prosecuted 19 cases, and convicted eight traffickers, compared with 32, 23, and three, respectively, in 2019. The government did not report any investigations, prosecutions, or convictions of government officials complicit in trafficking offenses. Estonian and Finnish authorities cooperated on a labor trafficking case in Finland, which resulted in the arrest and conviction of two traffickers. Experts reported the need for increased training for law enforcement, prosecutors, judges, and front-line personnel on understanding different forms of exploitation. The police included a trafficking module, covering national and international law, forms of exploitation, and protecting victims, as part of the curriculum for future officers.

The government marginally increased protection efforts. In 2020, authorities identified 34 presumed victims, compared with 67 in 2019, 14 in 2018, and 12 in 2017. Of the 34 identified victims, 29 were foreign nationals from Eastern Europe (12 labor trafficking, 17 sex trafficking), compared with 54 in 2019. Authorities attributed the decrease in the number of identified victims to pandemic-related travel restrictions enforced at the borders. Separately, authorities identified one child labor trafficking victim, the same number as in 2019. All identified victims received government-sponsored assistance. In 2020, the Social Insurance Board (SIB) allocated €158,000 ($193,870) to an NGO providing trafficking victims’ support services, such as shelters, an increase from €125,000 ($153,370) in 2019. During the reporting period, the government implemented a new information and data sharing system to expedite the exchange of information from the police to social services. The government provided identification and referral guidelines, describing all relevant authorities’ responsibilities in assisting victims. The Victim Support Act and the penal code allowed multiple actors, including NGOs, to identify victims and refer them to the SIB, permitting victims to receive comprehensive, government-funded, trafficking-specific services without first requiring the victim’s cooperation with police or the commencement of criminal proceedings. Victims who cooperated with law enforcement received services, such as accommodation, psychological, medical, and legal assistance, for an unrestricted period, while presumed victims who did not participate in criminal proceedings could receive government-funded services for up to 60 days. Authorities placed child trafficking victims and unaccompanied children in alternative care facilities, including three dedicated centers for child victims of abuse, including sexual violence and trafficking, offering specialized services for up to 60 days. Officials noted the need to increase procedural capacity regarding child sex trafficking victims. Subsequently, the government organized four trafficking-related training seminars for child protection and victim support personnel; the seminars focused on recognizing trafficking indicators and best practices in identifying and supporting child victims. The Aliens Act enabled foreign victims to receive temporary residence permits, accommodation, and education; the government did not grant temporary residence permits to any foreign victims, the same as in 2019. The Police and Border Guard implemented a questionnaire and checklist to identify trafficking indicators among asylum-seekers. Due to the pandemic, the Police and Border Guard issued a regulation granting foreign nationals, who were staying in the country legally at the time the government declared a state of emergency and whose return was suspended or not possible due to travel restrictions, temporary stay for up to 10 days following the end of the state of emergency. The right to stay was automatic, requiring no application process. In 2020, courts ordered traffickers to pay four victims’ restitution in the amount of €125,000 ($153,370), compared with zero in 2019 and €21,000 ($25,770) in 2018.

The government increased prevention efforts. The government continued to fund and implement its 2015-2020 plan for reducing violence, which included trafficking. The anti-trafficking working group, comprising 35 government agencies and NGOs, developed a violence prevention accord for 2025-2030, which awaited approval from the government, and published an annual report of its activities. The government conducted awareness-raising activities and training programs targeting students, youth workers, and teachers. The SIB created a podcast, in Estonian and Russian languages, discussing trafficking and available related social services. In collaboration with other Baltic Sea Region countries, the government participated in a project establishing long-term cooperation between stakeholders and academia to educate future journalists on trafficking issues through workshops, panel discussions, and competitions. The government made efforts to reduce the demand for commercial sex acts by creating a program aimed to change the behavior of sex buyers through social measures. Due to the pandemic, the government extended the permissible length of short-term foreign worker employment to a maximum of 730 days within 913 consecutive days, compared with 365 days within 455 consecutive days prior to the pandemic. Furthermore, the government amended the Aliens Act to enable foreigners with short-term work visas working in crop and plant production, hunting, and related services to continue working past the expiration of their visas with the potential to extend. Additional amendments to the Aliens Act prevented the misuse of employment regulations and ensured enterprises pay taxes and migrant workers the average monthly salary required by the law. Estonian law prohibited recruitment agencies from charging fees to job seekers for placement services and required the labor inspectorate to monitor agencies for compliance. The inspectorate provided migrant or local workers with free legal services regarding work-related problems, such as unpaid salary, and maintained an informational phone line and website on workers’ rights. In an effort to decrease the number of illegal foreign workers, reduce cases of delayed or under payment, and improve occupational safety and health, the government established a new electronic registration system for construction site employees to provide insight into subcontracting relationships and working hours. The government conducted a training session for 37 labor and occupational safety and health inspectors on recognizing labor trafficking among migrant workers. The government managed an NGO-operated anti-trafficking hotline, which received 608 calls from vulnerable individuals and identified 12 potential trafficking victims; the hotline provided counseling and services in Estonian, Russian, and English.

As reported over the past five years, human traffickers exploit domestic and foreign victims in Estonia, and, to a lesser extent, traffickers exploit victims from Estonia abroad. Traffickers tend to recruit and exploit their victims, including children with promises of money or video games, via the internet and social media. Authorities report a rise in the number of online traffickers from foreign countries. Trafficking victims originate from Eastern Europe, Asia, and Africa. Observers noted the majority of trafficking cases in Estonia are sex trafficking and involve women from Ukraine and Russia. The majority of cases involving child victims are sex trafficking committed against children as young as nine years old. In general, women and children are mainly at risk of sex trafficking and men of labor trafficking. Due to the pandemic, the number of migrant workers coming to Estonia decreased by 31 percent, from 32,272 persons in 2019 to 22,158 in 2020. Migrant workers are vulnerable to labor exploitation within Estonia, particularly in the construction and transportation sectors. Officials noted foreign “posted workers,” hired by temporary agencies and placed in Estonian companies, and their family members are especially vulnerable to trafficking.