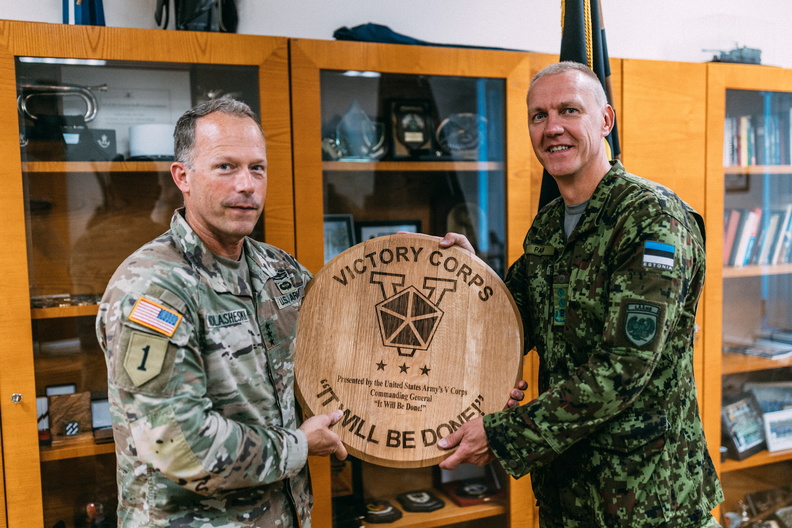 “I am pleased to have the opportunity to visit and meet with senior leaders from the Estonian Defense Forces and Ministry of Defense,” said Lt. Gen. John Kolasheski, Commanding General of V Corps. “This is an important relationship, and we look forward to expanding it as V Corps’ responsibilities in Europe grow,” Lt. Gen. Kolasheski added.

“The U.S. decision to reactivate the well-known V Corps is very valuable to us, and we applaud both the speed and perseverance with which this deliberate process has been executed. Nowadays, battles are fought not only in the information or cyber domains, but also in physical environments, where conventional units and hard firepower are important. This is the advantage of a corps-level unit. In Estonia, we are looking at every possibility to make us better, and V Corps helps us to improve our national defense at every level – from individual soldiers to the highest military leadership,” said Veiko-Vello Palm, MG, Deputy Chief of Defense of the Estonian Defense Forces.

U.S. European Command’s forward-based posture demonstrates America’s continued commitment to defending mutual interests and serves as the bedrock of our ability to respond to threats in the region. The United States European Command and Estonian Defense Forces continue to work together to achieve joint strategic objectives and guarantee stability in the region. Defense cooperation is a key component of this relationship. The United States has provided more than $240 million in security assistance to Estonia since 2015 and conducts regular exercises and military-to-military engagements with the Estonian Defense Forces to bolster readiness and interoperability.