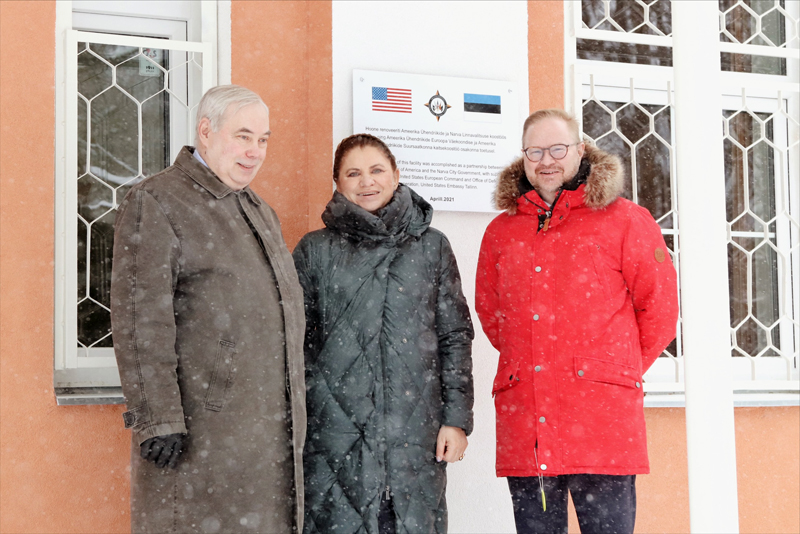 The United States Embassy in Tallinn marked World AIDS Day (December 1) in Narva on Tuesday with a ceremony to celebrate the completion of renovations at Narva’s HIV and Addiction Rehabilitation Center, run by NGO “You Will Not Be Alone.” The renovations, totaling more than $450,000, were funded by the U.S. Department of Defense’s Humanitarian Assistance program and coordinated by the U.S. Embassy. This renovation allows the clinic to continue its essential mission of providing care, rehabilitation, and re-integration assistance for people who struggle with HIV/AIDS and drugs. The project not only demonstrates the United States’ commitment to ending the HIV epidemic and its strong cooperation with the people of Narva, it also highlights the U.S. Department of Defense’s assistance to local communities across Estonia.

“As the global community continues efforts to control the COVID-19 pandemic, we must not forget the persistent challenge of the global HIV epidemic, now entering its fifth decade. The renovation of the Narva HIV Clinic and Addiction Rehabilitation Center demonstrates the United States’ commitment to the fight against AIDS. It also showcases our strong partnership with the Narva community as we work together to deliver life-saving HIV prevention and treatment services,” said U.S. Embassy Chargé d’Affaires Brian Roraff during the ceremony in Narva.

The renovation of Narva’s HIV and Addiction Rehabilitation Center was funded as part of the U.S. Department of Defense’s Humanitarian Assistance program, administered by the U.S. Embassy’s Office of Defense Cooperation. Since 2012, the program has completed eleven projects in Estonia, totaling $4 million. Recently completed projects include the Post-Amputation Rehabilitation Clinic at East-Tallinn Central Hospital, two schools in Sillamäe, and the donation of an ambulance to Hiiumaa. There are also five ongoing and future assistance projects, totaling $3 million, which include schools in Rummu, Maardu, Võru, and Tsirguliina, as well as an orphanage in Jõgeva.

“The Department of Defense’s Humanitarian Assistance program is a great way to partner with local communities in Estonia,” explained Lieutenant Colonel Robert Padgett, head of the Office of Defense Cooperation at the U.S. Embassy. “The work done in cooperation with the Narva city government and other local governments benefits all citizens and is a strong symbol of the U.S. commitment to Estonia, our NATO ally, and recognizes the outsized contributions that Estonia makes to NATO’s common security.”

While in Narva on November 30, U.S. Embassy Chargé d’Affaires Brian Roraff will participate in a re-opening ceremony for the American Space located at the Narva Central Library. Since 2016, the U.S. Embassy has invested nearly a half million dollars into Narva American Space infrastructure and programming, including the recently completed installation of a new ventilation system. Over the past two years, despite the COVID-19 pandemic, the Narva American Space has conducted nearly 500 programs and hosted more than 6,100 program participants.

“We are so happy to officially reopen the Narva American Space, hosted at the Narva Central Library. From English conversation clubs to digital literacy courses to programs highlighting science and technology, we are extremely proud of the work the American Space does to share American culture and provide important skills to people in Narva and across the Ida-Viru region,” U.S. Embassy Chargé d’Affaires Brian Roraff said.

The Narva American Space offers free cultural and educational events, including master-classes in 3D printing in its MakerLab, as well as meetings with American speakers, specialists, and performers. Opened in 2004, the Narva American Space is a partnership between the U.S. Embassy in Tallinn and the Narva Central Library, with additional support provided by the U.S. Department of State and the Cultural Department of the City of Narva.