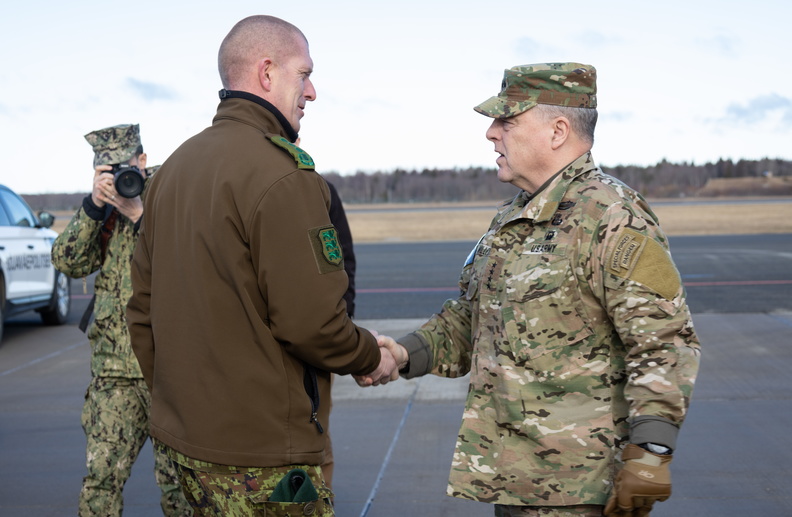 Chairman of the Joint Chiefs of Staff, General Mark Milley visited Tallinn on March 6, 2022, to highlight the strong U.S.-Estonia defense partnership and to discuss ways to continue to enhance security cooperation in the future.

The senior leaders discussed the joint response of NATO Allies and European partners to the Russian Federation’s continued premeditated, unprovoked, and unjustified war against Ukraine.  They also consulted on joint efforts to support Ukraine and strengthen NATO’s deterrence and defense posture in the Baltic region.

“The United States military has deployed forces in support of NATO Allies and partners, to assure our commitment to NATO and deter Russian aggression,” said Milley.  “Our commitment to NATO is ironclad, and we will fulfill our duties and responsibilities as an Article 5 member.”

“Our thoughts are with the people of Ukraine.  All our discussions in recent days have been focused on how to improve our help to Ukraine and end this unjustified Russian aggression against independent Ukraine,” said Lieutenant General Martin Herem, the commander of the Estonian Defense Forces, adding that “although the threat of war in Estonia is low, the allies are constantly monitoring the situation and are ready to support us if it is needed.”

Milley’s visit underscores the United States’ commitment to security partnerships in Estonia and the Baltic region. The United States has provided and continues executing over $240 million in security assistance programs to Estonia funded between 2015 and 2020.  In 2021, U.S. funding for security assistance to Estonia included more than $50 million for integrated air and missile defense equipment and training; aircraft recovery and firefighting equipment and training; communications networks and radios; intelligence, surveillance, and reconnaissance equipment; and underwater maritime domain awareness and mine countermeasure systems.  The United States and Estonia also jointly participate in multiple exercises and military-to-military engagements each year.