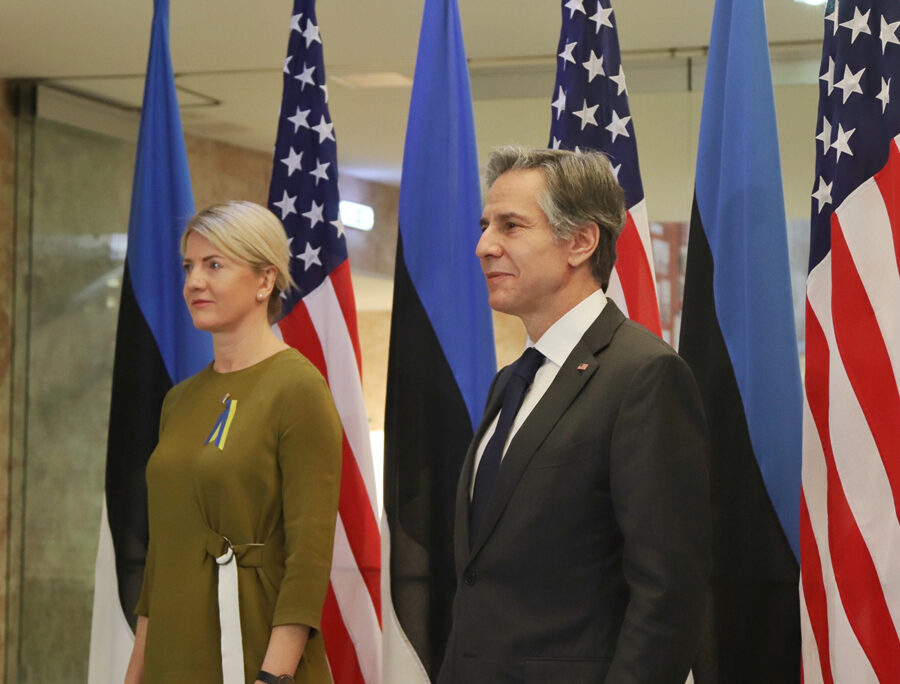 FOREIGN MINISTER LIIMETS:  Dear Secretary Blinken, dear Tony, it’s really an honor for me to welcome you today in Tallinn.  We just met in Washington, D.C. on the 16th of February, just on the eve of this unjustified war that we see at the moment, war in Ukraine started by Russia, which of course has changed the security dialogue here in Europe.  We had a ton of discussion what we should do together to support the Ukraine in these very difficult circumstances.  Of course, we must continue to support Ukraine politically, economically, and continue to give the humanitarian aid and also defensive means for Ukraine.

Yesterday morning, we read in the news that more than 1.8 million refugees have left their homes in Ukraine.  This is something that we all need to work on.  As the security situation is changed in Europe, the power balance has changed as well.  We must continue to strengthen the defense and the (inaudible) posture here in NATO, especially in the eastern flank.  And we are very thankful for recent NATO decisions.  But this is our hope, that by NATO summit in summer we will have permanent solutions for NATO’s permanent defense posture here in the eastern flank so that (inaudible) continue to work hard to strengthen the security situation in Europe and particularly in this eastern part of Europe.

We also discussed how to influence Russia to stop the war, this unjustified war in Ukraine, and stop this invasion.

And so there are many things that we discussed and I am very thankful for these discussions.  Also it was just this year we celebrate 100 years of diplomatic relations between Estonia and the United States.  It is, of course, unfortunate that we have to celebrate this anniversary in these very unfortunate circumstances, but I think that we just agreed that we have very strong bilateral ties, and there are many areas also where we can continue to strengthen our cooperation.  And we on Estonia’s side really appreciate this close cooperation with very important, key ally for us.  Thank you for coming to Estonia today.

SECRETARY BLINKEN:  Well, thank you, Eva-Maria, so much.  It’s very good to be here in Estonia.  As you said, we were together just a few weeks ago in Washington on the eve of this terrible aggression by Russia against Ukraine.  I think we both recognize that this was more than possible; it was probable.  We, of course, were hoping for the best, which was not to have a war of aggression by Russia, but prepared for the worst.

And what’s been so important is that over many months working closely together with Estonia, working with NATO Allies, working with European partners, working with other countries around the world, we were prepared.  And prepared to make sure that we were doing everything possible to support Ukraine, prepared to make sure that we would do everything necessary to strengthen NATO and its eastern flank, prepared to carry forward our commitment to impose massive consequences on Russia if it committed aggression against Ukraine.  And we’ve done all these things.

So it’s wonderful to be here.  I wish it was under a different circumstance, but the circumstances really required it.

Finally, I just want to reiterate one thing, because it’s so important.  President Biden is absolutely committed to our NATO Alliance, committed to Article 5, the proposition that an attack on one is an attack on all, and he’s made very clear repeatedly, including to the American people during his recent State of the Union address, that we will defend every square inch of NATO territory if it comes under attack, if it’s on the receiving end of aggression.  And it’s important that I reiterate that message from the President here in Estonia.  Thank you.