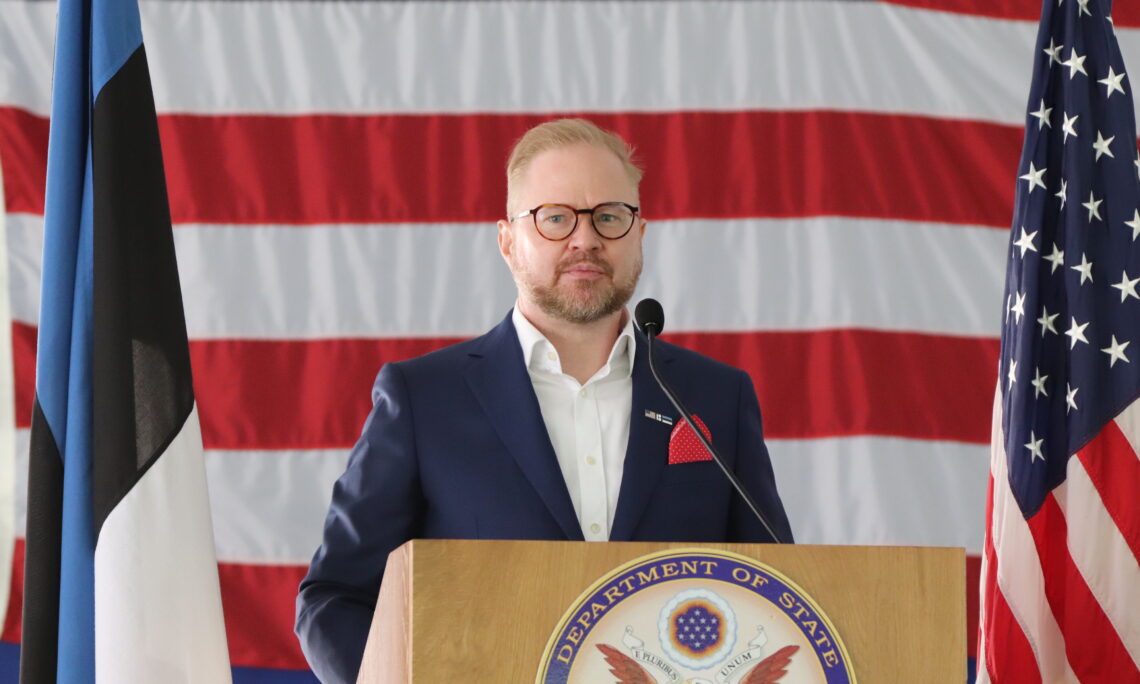 Good afternoon and welcome to our annual celebration.  It’s great to be able to celebrate our Independence Day like this for the first time since 2019.

The first thing I think I need to address is why are we celebrating July 4th on June 16th?  That’s because this year is special in that we are not only marking the United States’ 246th birthday, but also the 100th Anniversary of Diplomatic relations between the U.S. and Estonia.  In fact, our Embassy right now is in the midst of our ‘100 Days to 100 Years’ campaign with programming across the country to celebrate the history of U.S.- Estonian relations and the people and organizations that have strengthened and expanded that relationship.  I’ll speak more about that in a minute, but I wanted to take a quick look back at where we started 100 years ago.

The exact date the United States and Estonia established diplomatic relations was July 28th, 1922.  Estonia opened its representation in Washington DC, but later moved it to New York in the mid-1930s, where it would remain for nearly 60 years.  An Estonian diplomat named Ernst Jaakson was assigned to the New York representation in 1932 and later became ambassador.  Little did he know that his assignment would last 61 years until he handed over his ambassadorial duties to Toomas Hendrik Ilves in 1993.  When Jaakson died in 1998, the State Department considered him the longest-serving diplomat in the world.  For the U.S. here in Tallinn, we eventually settled into a building on Kentmanni street in 1930.  This is the building we occupy today.

Our two countries built relations before World War II.  The U.S.S. Pittsburgh visited Tallinn in 1923, the first visit of a U.S. naval vessel to an independent Estonia.  In 1938, former U.S. President Herbert Hoover visited.  He met with President Konstantin Pats at Kadriorg, and was made an honorary citizen of Tallinn at the Town Hall.  This was in thanks for his work as the head of the American Relief Association, which had provided much needed food to 37 countries in Europe in the immediate aftermath of WWI, including Estonia.  In fact, during 1919 and 1920 as Estonia fought for and gained its independence, the Relief Association provided 41 kilograms of food per Estonian during this trying time.

Two years later in 1940, the Soviets occupied the Baltics and the United States closed its Embassy.  However, we did not go quietly.

Most of us are familiar with the 1940 Welles Declaration, which established the U.S. Government’s official policy of non-recognition toward the Soviet Union’s illegal occupation of Estonia.  We Americans love telling the story of the Welles Declaration because it is a great historical example of what binds the U.S. and Estonia together.  But I would argue the principles in that document are more pertinent than ever today in Europe as we face the greatest challenge in decades – Russia’s war on Ukraine.

The Welles Declaration stated that: “The people of the United States are opposed to predatory activities no matter whether they are carried on by the use of force or by the threat of force.  They are likewise opposed to any form of intervention on the part of one state, however powerful, in the domestic concerns of any other sovereign state.”  Estonia understands this, and has been a great supporter of Ukraine, providing a truly impressive amount of military assistance to the brave fighters there.  In fact, as a percentage of GDP, no country has done more than Estonia.  I’d note also that it was in December, months before Russia’s attack, when the United States and Estonia began working together to get Javelin missiles to Ukraine.

Beyond our cooperation at the government level, Estonians and Estonian organizations have been truly impressive in supporting Ukraine.  For example, the Estonian Refugee Council is working tirelessly to support Ukrainian refugees.  The organization has been a leader on helping them settle safely in Estonia through an innovative cash assistance program, and it is also providing aid in Ukraine to directly reach those who have suffered due to Russia’s aggression.  The U.S. Embassy has partnered with the Refugee Council for many years, and no matter the crisis, no matter the conflict, they understand that a refugee is a refugee, and have always worked tirelessly to help individuals survive and thrive in the toughest of circumstances.  As we mark World Refugee Day next Monday, we salute the Refugee Council and all other humanitarian workers worldwide who help those most in need.

With us also today is the leadership team of the Ukrainian Cultural Center.  The center not only serves as a representative for the Ukrainian community in Estonia, it has also been a strong advocate for the Ukrainian people and is coordinating assistance both here and in Ukraine.  It is an amazing organization that has provided support to not only Ukrainian freedom fighters, but also provides art lessons to Ukrainian refugee children here in Estonia.

Partners like these take concrete actions to support Ukraine and demonstrate that the principles of the Welles Declaration still matter and still animate our actions.

As I mentioned, the Welles Declaration formed the basis of U.S. Estonia relations for 50 years.  For Estonia, there was eventually a happy ending when it seized back its independence in 1991.  In fact, in August of that year, then Foreign Minister Lennart Meri called his contact at the State Department in Washington to express concern that the U.S. was moving too slowly in recognizing Estonia’s restoration of independence.  The State Department official with whom Meri spoke invoked the Welles Declaration and told him simply, “Lennart, we already recognize Estonia’s independence.”

Since 1991, our relations have expanded year after year.  While the basis of our relationship is security, it is deeper than that, and the spectrum of our partnerships is wide.  Indeed, we have recently expanded our cooperation with the Estonian government on development assistance, allowing both countries to multiply our aid impact in Central Asia, the Caucasus, and the Balkans.

In business and trade, this year, we celebrate AmCham’s 25th anniversary, and remember how their work, as well as the work of partners like Enterprise Estonia, have strengthened our business connections.  I’d like to take this moment to recognize our partners in the business community who helped sponsor this event.  On our sponsors board here on the stage, and when you walked in, you can see many of these fine companies who have contributed to today’s event and we hope you’ll join us in thanking them for their support.

Our cultural partnership is also strong.  Today Americans can see Saaremaa’s own Ain Anger perform at the Met in New York, and Estonians can see some of the best American folk musicians perform at the Viljandi Folk Festival.

As I mentioned earlier, our Embassy is in the midst of our ‘100 Days to 100 Years’ campaign with programming across the country.  As part of this campaign, we brought the U.S. Army Soldier’s Chorus to Valga, Viljandi and Tallinn where they played rhythm and blues, arguably the purest form of American music.  Just last week we were in Narva to co-host the Soap Box Derby in which participants race homemade cars down a hill.  We started this tradition in 2007 with local partners and were thrilled to bring it back after a two-year break.

Taking this moment to look back at 100 years of our relationship also compels us to look at the next 100 years.  I am confident in saying the basis of our relationship is not going to change.  We have been partners for 100 years because we share the same core values and those core values, too, are not going to change.  I see us facing global challenges together – from climate change to authoritarianism.  We will continue to work with Estonia as a leader on digital and cyber issues, especially as we seek to share your experience and expertise with other countries around the world.  We will stand together as NATO Allies to uphold the Alliance’s founding principle of collective defense.

And, as we have demonstrated in the wake of the Russian invasion of Ukraine, I believe that the future is unity.  Unity against authoritarianism.  Unity in support of our Allies and partners.  And unity behind our democratic values, wherever and however they may be challenged.

I am proud of what the United States of America and the Republic of Estonia have accomplished together.

And I’d like to take this moment for a personal note.  After three years in Estonia, my family and I will be departing this summer.  I wanted to express how thankful we are for what has certainly been our most rewarding and enjoyable tour in the Foreign Service.  We have two young daughters who have thrived in Estonia.  They loved running through the castles in Haapsalu and Narva.  They have visited the AAHAA Center in Tartu countless times and seem to enjoy it more every time.  More than anything, they’re going to miss Lottemaa in Parnu, which has been our annual summer adventure.  My wife was thrilled to work at the NATO CCDCOE on the team that organized Locked Shields and CyCon.

I myself, I will certainly miss living and working in Estonia, but I don’t plan on saying a real goodbye since I will continue working on Estonia and Baltic matters.  I will return to Washington to head our office that works on the UK, Ireland, Nordics and Baltics.  So the good news is that you have a friend going back to Washington to continue to work on our joint priorities.  And I will take with me the moral clarity of Estonia, which is clear-eyed about the threat it and Eastern Flank Allies face from Russia.

Looking back, it has been an amazing three years.  Of course, we are gathered here to commemorate the United States’ 246th Independence Day, too, and I have great pride in representing the United States.  My tour has spanned two U.S. presidential administrations, and I can tell you that across our party lines in the United States, support for Estonia is strong.  People may be inclined to be concerned about the roller coaster of politics, but I am here to tell that our partnership has been steady and strong and will remain so long into the future.  That is the strength of America, our Transatlantic Alliance, and our commitment to our bilateral relationship.  Therefore, this is not a real goodbye.  It’s a celebration and a look ahead.

So as we celebrate the milestone of 100 years, if we let the past be our inspiration and work hard in the present, our future will be bright.  Elagu Eesti, God Bless America, and here’s to the next 100 years of our partnership.