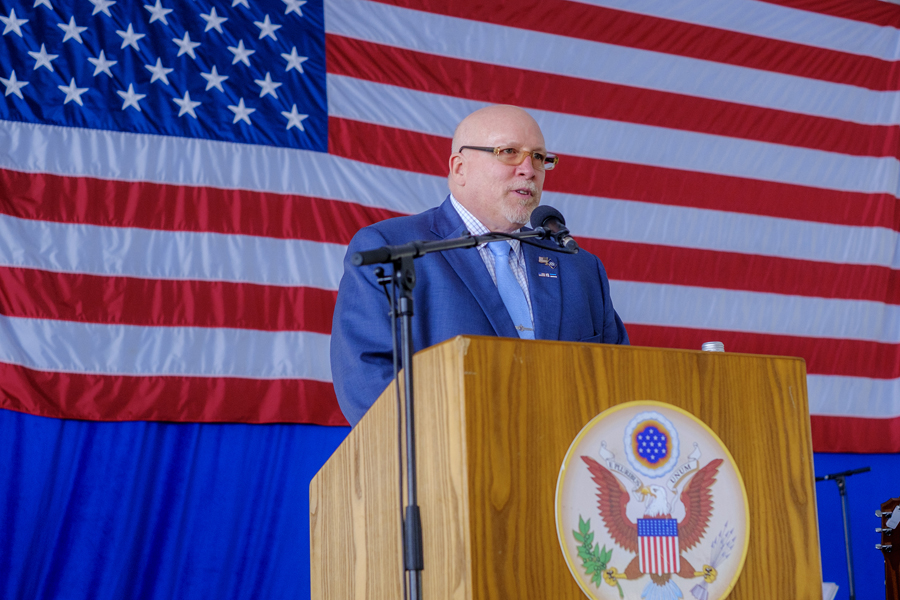 Guests, friends, it’s an honour, a privilege, and a joy to be able to welcome you to the U.S. Embassy’s celebration of American independence. I’d like to start by thanking the sponsors of this event. Without their co-operation and support it wouldn’t have been possible. Their names are all on the signboard in the back. Thank you all very much. I’d also like to thank my fantastic embassy team who worked very hard to make this day possible and I also would like to thank the U.S. Air Force Wings of Dixie band. Please give them another round of applause. They’ll be back, they’ll be back.

We got up this morning and my bedroom up there, I looked out and I couldn’t see more than ten feet. We all said a little prayer and the sun did come out and we are very happy that it did. Being able to celebrate July 4th this year in Tallinn, as Estonia marks its hundredth year of independence, is a particularly special moment. Whether it’s 242 years as in the U.S. or 100 years in Tallinn, it’s an opportunity to think how remarkable and precious independence is and few countries appreciate it more than Estonia.

As you all know, the U.S. never recognised the illegal occupation of Estonia. The Welles Declaration of 1940 underpins the fact that Estonian independence has truly been alive for one hundred years. A highlight of 2018 for me was when the mayor of Tallinn, Taavi Aas, dedicated the Ernst Jaakson tram, the latest and final of these beautiful blue old-style new trams. This one in particular runs between Kadriorg and the Old Town. Taavi asked me to participate in the dedication of Ernst. Mister Jaakson served as the chief diplomatic representative of Estonia in the United States until 1991. After which he was appointed the ambassador to the United States. In all, mister Jaakson worked in the Estonian foreign service for over 70 years and served as a diplomat for 69 years. As you all know, my tenure will be considerably shorter than that. United States has been independent for a little longer than Estonia, but our two countries share so much in terms of values and priorities.

We are both vibrant democracies and have thriving economies where ingenuity and initiative can flourish. Estonia deserves all the credit in the world for the amazing success since you took back your independence and sovereignty, another beautiful word, back in 1991.

So now we come to the question you are all wondering about – what is Jersey style? So, I was born and raised in New Jersey and so was Joanna. There you are. If you know us, you get some sense of what Jersey style is. But for us, especially on the 4th of July… I am from the shore so I tend to think about being down the shore, of hot summer days, hot dogs, hamburgers, pizza, salt water taffy – all that stuff that tastes so good it’s probably not so good for you. Flip-flops, the best corn and tomatoes in the whole world come from New Jersey. And loud beautiful music. Frank Sinatra, Whitney Huston, Dionne Warwick, Bruce Springsteen, Jon Bon Jovi, and Charlie Puth all are from New Jersey. And another fact about New Jerseyans is we tend to speak a bit too frankly. Sometimes it is not for our own good. Ben Franklin famously said that New Jersey was a barrel tapped at both ends. Between Philadelphia on one end and New York being on the other end, you know sometimes it’s hard to get a little respect.

Many of you probably don’t even realise it but the Statue of Liberty and Ellis Island are both in New Jersey, but we don’t seem to get any credit for that at all. That frankness, that speaking directly, sometimes it gets in the way of being a diplomat too. So tonight, I am going to let the diplomat win. When I open… Oh, by the way, the one exception to not thanking all the sponsors, is I want to point out the cake, which is going to come out in a minute and it will answer the important geographic question – what does New Jersey look like? I am particularly grateful to the Radisson Olümpia for providing us that beautiful cake.

When I opened by saying that it has been an honour, a privilege, and a joy to be here, that is not just a pretty turn of phrase. I sincerely mean that it has been a privilege to work with a partner like Estonia. Hand in hand in so many issues and challenges. Representing the United States in Estonia is an extraordinary honour. As I finish my 33 years as a diplomat, these last three have been the experience of a lifetime. I Have travelled from Saaremaa to Narva, from Tallinn to Setomaa, where I actually saw her majesty, who is here with us tonight, a woman being crowned king. That doesn’t happen everywhere. I have driven the ice-road to Vormsi and I have had mud treatments in Pärnu. Joanna and I will carry Estonia in our hearts when we leave at the end of this month. I will also carry an e-residency card with me as a wonderful reminder of my time here in Estonia.

When I look out at this audience, I am so grateful for the many colleagues and friends who have blessed our time here. I am grateful to my embassy staff for their tireless work in making this partnership as strong as it is. Whether it be military co-operation, cultural exchanges, or keeping our aging building operating long beyond its normal life.
Thank you again. Thank you to all our sponsors, my colleagues, my friends, all of you who are here. But most of all, I want to thank my wife Joanna who has been my partner, confidant, gut check, and best friend throughout this entire diplomatic journey. I could not have done this without you. I feel so blessed to have shared it with you.

Before I turn the stage back over to the cake cutters and the musicians, in the immortal words of Arnold Schwarzenegger: I’ll be back. If some point next year during the wonderful Estonian Song Festival, if you see a couple of folks who sort of look like Jim and Joanna wandering around in Lauluväljak, say hi, because it might just be us. So, with that, all I have to say is ‘nautige pidu’!