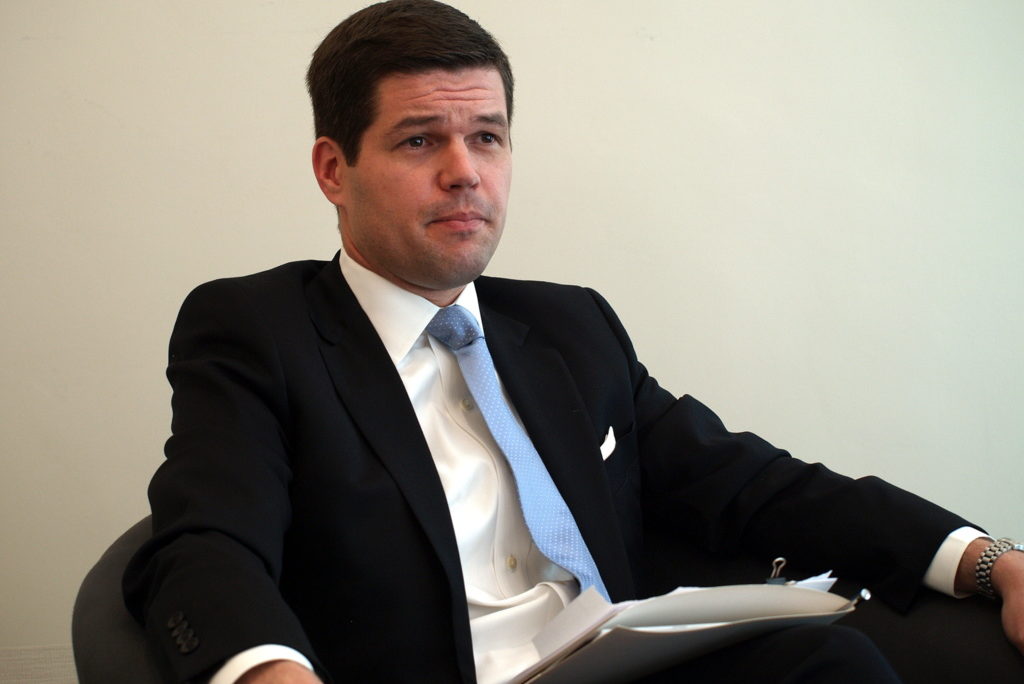 Thank you for those kind words, Secretary Tillerson—I’m grateful for the confidence that you and President Trump have placed in me to lead the Bureau of European and Eurasian Affairs. Let me also express my appreciation to our other special guests today—Senator Johnson, Under Secretary Shannon, members of the diplomatic corps, congressional staff, and so many of my good friends and colleagues.

I’m proud to have by my side this morning my wife Elizabeth and our two children, Wesley and Charlotte. Taking this job was a family decision, and Elizabeth has been by my side every step of the way. I’m also thankful to members of my family who travelled so far to be here today: my parents, brother, sister, sister-in-law, niece, nephew, aunts, uncle and cousins as well as Elizabeth’s grandmother and family friends from California and Spain.

I’m especially grateful to my mom and dad, who have set a lifelong example for their children of hard work, self-sacrifice and service to the community through commitment to a cause higher than one’s self.

I’m also pleased to be joined today by so many of my new colleagues from EUR. I want to acknowledge Principal Deputy Assistant Secretary Elisabeth Millard, who skillfully led the Bureau during my confirmation process; as well as John Heffern and the many talented Deputy Assistant Secretaries of EUR. I especially want to thank the dauntless Larina Konold and the indefatigable Danielle Stoebe—who together have kept the chaos at bay during my transition these past few days. I also want to thank my immediate predecessor Toria Nuland for the world-class team she bequeathed to me, and my mentor and friend Dan Fried for his many months of counsel and support.

Let me also acknowledge the many members of Congress and staff for their support through the confirmation process. Finally, let me thank Chief of Staff Margaret Peterlin, Brian Hook from Policy Planning, Jen Wicks from the transition team, Mary Waters and her team from legislative affairs and Athena Katsoulos from EUR PRESS for everything they’ve done to help get me to this point.

Joining EUR is for me the culmination of an intellectual and professional journey that began more than two decades ago. I have lived and worked in Europe, studied its languages, history and geopolitics, and, for the past twelve years, led a transatlantic think-tank, CEPA, with analysts and programs in countries across Europe.

Generationally, I am the first Assistant Secretary in this Bureau whose career has occurred entirely within the boundaries of the post-Cold War era. This has been a time of unprecedented peace and prosperity for the nations of the West—a time of greater wealth and stability than the world has ever known, of expanding institutions, boundless trade and freedom from the fear of Great-Power war.

The world as we know it rests on the work of an earlier generation of Americans who made the decision not to retreat from Europe after the Second World War as America had done after the First. They built NATO, placed permanent U.S. bases in Europe and formed the Marshall Plan. Doing so helped European nations reeling from the ravages of two world wars band together to resist the encroachments of Soviet Communism. But it also provided an insurance policy for America against the return of the devastating wars that twice in the twentieth century had pulled us into European affairs on terms not of our own choosing, at immeasurable expense in American blood and treasure.

Today, we face new challenges. There is the danger of an atavistically revisionist Russia that destabilizes its neighbors, props up hostile regimes, and works to undermine the West from within. There is the danger of radical extremism that, even with ISIS in retreat, will continue to plot acts of barbarity against our citizens as they go about their everyday lives. And there is the danger from within, of passivity in our societies in the face of mounting danger, of faltering institutions and flagging confidence in the ideas on which the West as a political civilization was built.

In all of these areas, the task facing us today is no less severe than those that confronted earlier generations of Atlanticists. The task after 1945 was one of creation: to call into being a new reality that could not previously have been imagined. The task after 1989 was enlargement—to extend the gunwales of freedom to formerly captive nations in Eastern Europe. The task in our own time is preservation: to rally and conserve the West as a realm of ordered liberty against threats that few would have thought possible in the heady days after the fall of the Berlin Wall, and to adapt our alliances to face these new dangers.

As in the past, we can only hope to succeed if we stick together. America’s greatness, and it is vast, is inextricably linked to our alliances. No other nation in history possesses our wealth of allies. We must call upon our friends to show responsibility—to bear their fair share in defense and to confront hostile regimes on their own doorstep. But we must also articulate afresh to our citizens why Europe matters for America—why it matters to Pennsylvanians, Midwesterners, Texans—what happens in the Balkans, or the Baltic, or the Mediterranean.

In this task we are spurred by necessity rather than nostalgia: there is not a single major U.S. foreign policy objective in the world today, from defeating ISIS to containing Iran and North Korea that can be accomplished without America and Europe standing together.

Likewise, my new task as Assistant Secretary is not one in which I can succeed alone. I am inspired by the sacrifice and talent of the men and women of EUR, both here and in our embassies and consulates abroad. I share your commitment to the service of our country. I am committed to supporting each one of you in your careers, and in your collective work as the State Department’s finest bureau. I am privileged to face the challenges of our time by your side and humbled to be counted among you.

Thank you for this great honor to serve with you, and for coming today.