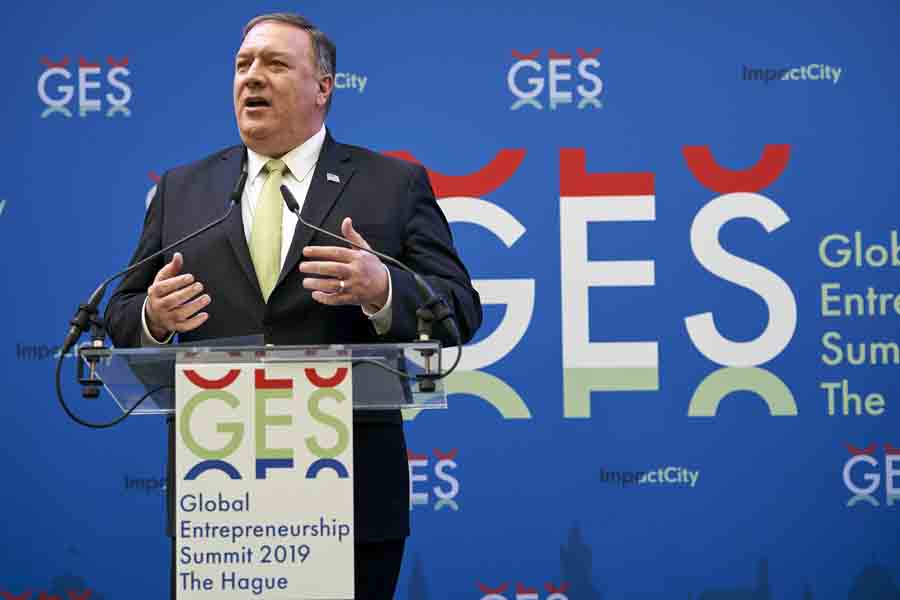 U.S. DEPARTMENT OF STATE
Office of the Spokesperson
For Immediate Release
June 5, 2019

The 2019 Global Entrepreneurship Summit (GES 2019), co-hosted by the U.S. and Dutch governments, showcased the depth and breadth of innovations that are improving lives around the world, and the critical role of governments in enabling environments for innovation to thrive.

With a theme of The Future Now, GES 2019 empowered entrepreneurs to pursue solutions to global challenges in the following sectors: agriculture/food, connectivity, energy, health, and water.  To reach these goals, investors from across the capital continuum, ranging from venture capital firms to family offices, intersected with scientists and entrepreneurs to harness industries of the future such as 5G, advanced manufacturing, and artificial intelligence (A.I.).  Investors, entrepreneurs, and policymakers all have important roles in harnessing these technologies to bring solutions to market, and GES 2019 brought these groups together to create the next waves of innovation.  Since July 2018 when President Trump and Dutch Prime Minister Rutte announced the Netherlands as the location for GES 2019, departments across the U.S. government have been launching new initiatives and innovations in emerging science, technology, and entrepreneurship in the United States and globally to create a better future, now.

GES 2019 showcased how investment in new technologies and businesses is spurring innovation now and building the foundation for future advancements.

The Water Security Grand Challenge is a White House-initiated, U.S. Department of Energy (DOE)-led framework to advance transformational technology and innovation to meet the global need for safe, secure and affordable water.  The framework will continue to 2030 to spur innovation through competitions, funding opportunities, and partnerships.

The U.S. Department of Health & Human Services (HHS) Deputy Secretary’s Innovation and Investment Summit (DSIIS) works with investors and industry leaders to make the future of innovation a reality by addressing gaps in healthcare investment.  Ongoing efforts will focus generally on four key issues: transitioning to value-based care; empowering consumers and increasing their engagement; liberating data to drive value; and developing best practices for approval and reimbursement of medical products and services.  HHS is also proposing a rule that will inject competition into the healthcare delivery system by eliminating challenges to patients using smartphone apps to access providers.  The HHS CARB-X and KidneyX initiatives dedicate hundreds of millions of dollars to tackle the rising global threat of drug-resistant bacteria and to prevent, detect, and treat kidney diseases, respectively.

The Department of Commerce and SelectUSA are introducing SelectUSA Tech at the 2019 SelectUSA Investment Summit to attract high-tech global companies to the U.S. market, creating jobs and spurring investment in the United States.  The first SelectUSA Tech event will connect approximately 100 start-ups from more than 20 countries to U.S. states and cities, and demonstrate how they can enter the U.S. market.

GES 2019 promoted investing in global gender equality to catalyze economic growth and boost prosperity for all, now and into the future.

The White House has prioritized women’s economic empowerment through the recently launched Women’s Global Development and Prosperity Initiative (W-GDP).  W-GDP seeks to economically empower 50 million women across the developing world by 2025, in order to spur economic growth and promote stability and peace.

Ivanka Trump and MasterCard CEO Ajaypal Singh Banga announced a new partnership between the U.S. Agency for International Development (USAID) and MasterCard to collaborate on the development and implementation of activities centered on the three Pillars of W-GDP: women prospering in the workforce, women succeeding as entrepreneurs, and women enabled in the economy.  This partnership will empower women with skills, including digital and financial literacy, provide women entrepreneurs with access to capital and other financial services, and promote enabling environments for women to succeed in the global economy.  Under W-GDP, USAID’s WomenConnect Challenge will begin a second phase focused on finding solutions to bridge the gender digital divide, ultimately improving women’s participation in everyday life.  Aligned with the goals of W-GDP, USAID intends to make a contribution of $500,000 in funding and $100,000 in technical assistance to the Women’s World Banking (WAB) Asset Management (WAM) blended finance fund to catalyze private capital investments in developing markets.  Joining USAID, the Overseas Private Investment Corporation (OPIC) intends to provide $25 million to the fund.  Such commitments would enable WAM to raise $100 million in private capital to invest in financial institutions to expand their reach to low-income women through digital finance services and customized financial products.

As part of W-GDP, the Department of State (DOS) created a new Academy for Women Entrepreneurs(AWE) that gives women around the world the knowledge and tools they need to start and scale their businesses, including how to develop business plans, raise money, and network for success.  At GES 2019, DOS rolled out new matchmaking app capabilities to connect over 1,000 entrepreneurs from all 50 states and over 120 countries with several hundred investors in 35 countries.  Similarly, DOS’s Providing Opportunities for Women’s Economic Rise (POWER) initiative, also under W-GDP, designed an app to connect U.S. women business development centers, incubators, and entrepreneurs to create stronger global business networks.

To support W-GDP, DOS leads the Women Entrepreneurs Finance Initiative (We-Fi), a multi-donor initiative on track to mobilize more than $1.6 billion in capital for women entrepreneurs in developing countries.  In addition to promoting women’s access to finance, markets, technology, mentoring and other services, We-Fi works with governments, civil society, and the private sector to change policies and address barriers inhibiting women’s businesses in developing countries.  We-Fi announced its second round of funding allocations in May 2019, allotting $129 million of donor funds to four multilateral development banks.

The Department of Labor (DOL) launched a $5 million initiative in Ghana in 2019, called Adwuma Pa, to economically empower women and girls vulnerable to child labor, forced labor, and other violations of labor rights in cocoa supply chains.  DOL announced in May 2019 an open competition for applications for a $5 million project entitled Equal Access to Quality Jobs for Women and Girls in Agriculture (EQUAL) in Colombia.  Both initiatives work with the private and non-profit sectors to improve the economic participation of these women and girls in quality agricultural jobs.

GES 2019 promoted a continuous commitment to finding and fostering innovative individuals who are creating the future, now.

DOS’s Global Innovation through Science and Technology (GIST) initiative is starting a GIST Business Incubation program to match top science and technology entrepreneurs from emerging economies with American innovators in the Heartland of the United States.  This will help generate joint ventures, increase U.S. insight into foreign-generated innovations, and expand international market awareness.

In 2019, DOS’s Young African Leaders Initiative (YALI), Young Southeast Asian Leaders Initiative(YSEALI), Young Leaders of the Americas Initiative (YLAI), and Young Transatlantic Innovation Leaders Initiative (YTILI) will engage thousands of youth leaders and entrepreneurs from over 125 countries to help them develop or scale up their businesses.  DOS’s exchange programs will implement over 50 professional exchanges on entrepreneurship in 2019.  These include sending 26 American entrepreneurship experts to speak in 28 countries; sending 10 American Fulbright Specialists to provide guidance to students overseas; and bringing over 300,000 foreign national exchange visitors to the United States.  Many exchange visitors will serve as interns or trainees at high-tech organizations before returning home to start their own businesses.

The U.S. Peace Corps – in the spirit of lifelong service and partnership with local communities around the world to address significant challenges – launched an initiative called Commit to Connect.  This initiative will harness technology to facilitate ongoing engagement of Peace Corps Volunteers in their local host communities and support continued development efforts in various sectors including agriculture, community economic development, and education.

GES 2019 demonstrated the U.S. commitment to supporting entrepreneurship and innovation. Because today’s innovations are the building blocks of the future, the United States and GES 2019 celebrated The Future Now.