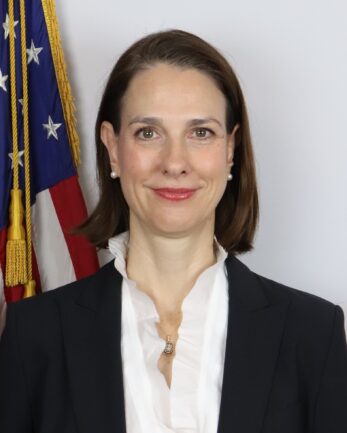 Gabrielle Cowan serves as Deputy Chief of Mission at the U.S. Embassy in Tallinn. She arrived in July 2022 and served as Chargé d’Affaires until January 2023.  Prior to joining U.S. Embassy Tallinn, Ms. Cowan served as Political Counselor at the U.S. Embassy in Paris.  Other assignments include a detail as Special Advisor for Europe and Russia in the Office of the Vice President and serving as Deputy Director in the European Bureau’s Office of Nordic and Baltic Affairs (EUR/NB), where she led a team in developing strategies to counter Russian malign influence and emerging security issues related to Arctic policy.

During her 20-year career in the Foreign Service, Ms. Cowan has served at U.S. Embassies in Tbilisi, Singapore, and Bosnia and Herzegovina.  She worked on Sudan, Chad, and Central African Republic related issues on the Security Council in an assignment to the U.S. Mission to the United Nations and on counterterrorism issues in Africa with the Bureau of Intelligence and Research.

Before joining the Foreign Service, Ms. Cowan worked as an attorney at both the Treasury and State Departments and clerked for a Federal District Court judge.  She received a B.A. from Duke University and J.D. from the University of Tennessee.