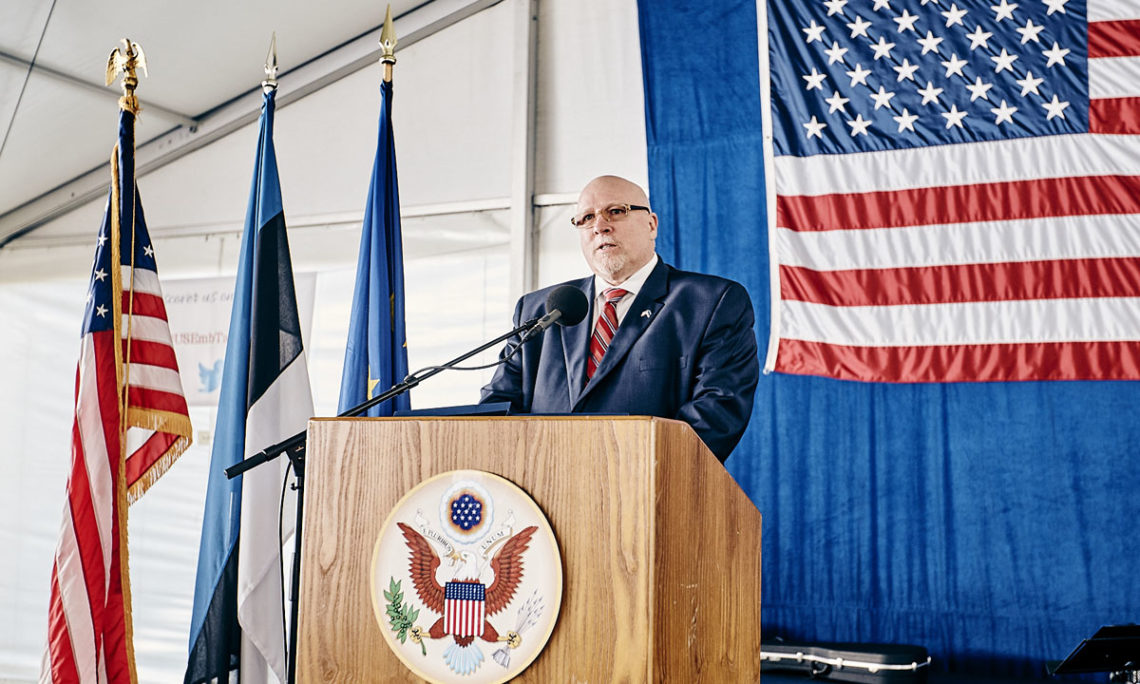 First, I’d like to start by thanking all of our sponsors! Without your generosity and support, this event would not be possible.

I’d like to thank Omar Torrez and his wonderful band, for providing such great entertainment! And thank you, Lee Luuk-Luuken for the beautiful performance of the anthems.

I must say that I’m enormously grateful to all of my fantastic colleagues at U.S. Embassy Tallinn for dealing with all the logistics and organization of this little celebration with 1500 of our friends.

You might have noticed and wondered about our choice to play the European Union anthem as well as our own and the beautiful Mu isamaa, mu õnn ja rõõm. It wasn’t just because I personally love Beethoven. It was our way to acknowledge and salute the role Estonia has now assumed with the Presidency of the European Union. As Prime Minister Ratas said last Thursday, “Europe is peace. Europe is freedom and shared values.”

What are those values?

The “truths” that our founders declared to be “self-evident” in 1776 are as relevant in 2017 as they were then: All people are created equal. We are endowed with certain unalienable rights, and that among them are: The right to life, liberty and the pursuit of happiness. Thomas Jefferson’s powerful words continue to inspire Americans and much of the rest of the world as well.

We enjoy the fruits of liberty – Freedom of speech, and of the press, the right of assembly and protest, and the rule of law because we cherish, nurture and, when necessary, fight to ensure the Founders’ vision is preserved, protected and defended.

I know that in this wonderful country, freedom and democracy aren’t just words. Estonia fought bravely and hard for its Independence a century ago, fulfilling the universal aspirations of its people for a free and sovereign nation.

I was very moved by President Donald Tusk’s words at the Opening Concert for the EU Presidency, as he described falling in love with Estonia at the time of the Singing Revolution. In referring to the Baltic Way, he said “I have known ever since that people holding hands can be stronger than people holding guns.” I know how he feels, because I too, fell in love with Estonia and your powerful devotion to peace and to freedom. I remember well watching joyfully from the U.S. Consulate General in Leningrad, as Estonia took back its independence from the Soviet Union in 1991. And since that moment nearly 26 years ago, Estonia has been a true partner with the United States. We share a close bond and an alliance based as much on our common values as on our common interests in freedom, democracy, prosperity and security.

We are firm in our conviction that a strong and vibrant transatlantic community brings stability, peace and economic prosperity to the world.

It’s been 70 years since implementation began on Secretary of State George Marshall’s visionary plan for the United States to help build a Europe that is united, prosperous and peaceful. For these past seven decades – and certainly throughout my career, the U.S. has maintained its strong commitment to building and supporting that Europe. A Europe that is whole, free and at peace.

As Vice President Pence – who will be here later this month – said recently of the transatlantic relationship, “Our unbreakable unity for freedom is our greatest strength.”

So I am very proud to be here with so many friends, and to stand together with Estonia and the European Union for freedom, liberty, justice and peace on this, the 241st anniversary of the Independence of the United States of America.