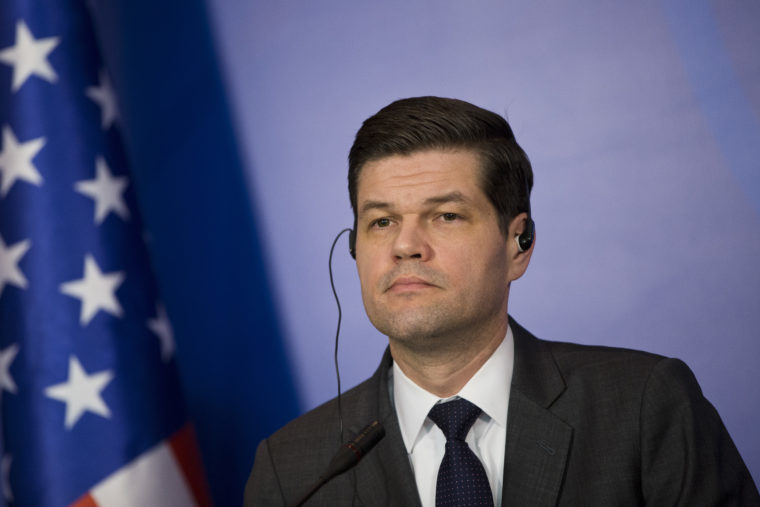 A/S Mitchell: Thank you, Damon, for that warm introduction, and I’d like to thank Atlantic Council for having me here to speak today at a very important conference. I appreciate the work that Atlantic Council does, both here and in Europe, and I have to say the title of today’s event I think is very timely. I think, as many of you know, it’s dealing with a set of countries and regions that are very close to my heart.

Next year marks the anniversary of the end of communism in Europe. Nearly 30 years ago, nations across Central Europe, many with ancient traditions of independence, were liberated from the long night of communist tyranny. Captive nations like Poland and Hungary showed the way to freedom, to a future of liberty and free markets. A few years later, those nations that had been forcibly incorporated into the Soviet Union itself — nations like the Baltic States, Ukraine, Georgia, and Moldova — achieved their independence as well.

The freedom that these nations won came first and foremost as a result of their own effort. As President Trump said last year in Warsaw, “The captive nations of Europe endured a brutal campaign to demolish their freedom, faith, laws, history, and identity — the very essence of their culture and humanity at the hands of a cruel and wicked system that impoverished their cities and their souls.”

In their battle against communism, these nations were supported by a strong alliance of free nations in the West that defied tyranny. When their freedom came, it was the result of a very fierce competition, a long struggle for mastery, in which America brought great resources and manpower to bear in defense of freedom.

Today there is a new competition for influence in the world. As outlined by the National Security Strategy, the return of big-power competition is the defining geopolitical fact of our time. The need to systematically prepare for this competition is the central task of U.S. foreign policy. That preparation begins at home by rebuilding the foundations of long-term American economic power, strengthening the manufacturing and defense industrial base, reinvesting in national defense, recapitalizing the U.S. nuclear arsenal, and addressing gaps in the defense industrial supply chain. Abroad, it means rebalancing burdens with allies and recalibrating international institutions that no longer match strategic reality.

Today’s geopolitical competition is sharply felt in Central and Eastern Europe. From the Baltic to the Adriatic, across the Balkan Peninsula and through the Caucasus, America’s rivals are expanding their political, military, and commercial influence. Russia is again a military factor in this region, following the invasions of Georgia and Ukraine. Well beyond the frontier, in the countries of Central Europe, Russia uses manipulative energy tactics, corruption, and propaganda to weaken Western nations from within and undermine their bonds with the United States.

And for the first time in history, China has become a major player in Central and Eastern Europe. Beijing uses debt-book diplomacy to accumulate infrastructure and force concessions on smaller nations. These tactics mirror Chinese behavior at the international level, where Beijing engages in unfair trade practices including IP theft, economic espionage, and dumping.

In 2008, China invested less than $1 billion in Europe. Just nine years later, in 2017, Chinese FDI in Europe was $42 billion and total investment was $318 billion. In recent years, China has taken control of 360 European companies and now owns or controls almost a tenth of Europe’s entire port capacity.

Part of the reason that our rivals are gaining ground in Central and Eastern Europe is that for too long the West did not take competition seriously here. After the Cold War, many in the West came to believe that history had ended and that enduring realities like geography, history, and the nation no longer mattered. Many in the West overlooked the foundational importance of the nation state and national sovereignty as one of the key sources, along with natural law, from which political legitimacy ultimately derives. International institutions came to be seen as ends in themselves rather than instruments that must bring security and relevance to the lives of the citizens they serve. Meanwhile, the strategic realities upon which post-World War II institutions were built were shifting all around us.

Even a casual look at the map today should lead us to question the assumptions that animated past policies and turn our attention to the urgent task of strengthening the West to contest the growing influence of our rivals. This task begins at Europe’s far frontier, in supporting states that are struggling to assure their continued independence. The dangers to Ukraine and Georgia are direct and existential, comprising both military threats to territorial integrity and sovereignty, and efforts to unravel the democratic institutions that their citizens are attempting to build. In Central Europe proper, the threat is of a degree of political and economic penetration that with time could degrade national independence and splinter NATO.

U.S. strategy toward these regions today is guided by certain principles. First, as outlined by the National Security Strategy, America will compete for positive influence abroad. America is a powerful democracy whose example as a beacon of liberty burns bright and continues to draw others to us. Nevertheless, we must not see it as a foregone conclusion that countries will automatically remain friendly to America. We must apply ourselves to the task of preventing their domination by American competitors.

Doing so requires an active diplomacy. China and Russia are engaged in a diplomatic full-court-press in sensitive regions around the world. The United States must show up or expect to lose. While we will always be clear about the principles that undergird our democracy, we must be willing to use diplomacy to aggressively advance the national interest. Not only by engaging countries with whom we agree, but by engaging with countries with whom we have serious differences, differences that can be exploited by rivals to increase their own influence.

Winning the competition for influence also requires us to up our game in commercial engagement. For China and Russia, promoting commerce is an integral part of diplomacy. China’s Belt Road Initiative seeks long-term influence by buying infrastructure, often with financial backing from the state. To a much greater extent than in the recent past, the United States must treat the promotion of U.S. business as inextricably linked to the future of our nation’s strength and influence abroad.

To that end, the Trump Administration, in support of the Bipartisan Build Act, is restructuring the Overseas Private Investment Corporation so that it has the authority and resources to offer countries viable private sector alternatives to Chinese financing. Working with Congress, we will double the existing portfolio capacity of OPIC from $29 billion to $60 billion, allowing America to go toe-to-toe with major rivals in vulnerable regions like Central and Eastern Europe.

In tandem, we are strengthening America’s public diplomacy in Central Europe. One of America’s greatest competitive advantages against authoritarian rivals is our story, our legacy as a democratic, generous, and entrepreneurial people. In Central Europe we have many natural friends and a shared history of fighting tyranny that goes back to the time of the American Revolution. To commemorate the 30th anniversary of the fall of communism, we will launch a year-long program of events, outreach and increased youth exchanges across Central and Eastern Europe and Germany to remind our friends of the shared history and ideals that unite the West.

While celebrating these bonds, a second principle for America is that we expect those whom America helps to not abet our rivals. Western Europeans cannot continue to deepen energy dependence on the same Russia that America defends it against. Or enrich themselves on the same Iran that is building ballistic missiles which threaten Europe.

The same holds true for Central Europeans. It is not acceptable for U.S. allies in Central Europe to support projects like Turkstream II and maintain cozy nuclear energy deals that make the region more vulnerable to the very Russia that these states joined NATO to protect themselves against. Many of America’s closest allies in Central Europe operate networks of corruption and state-owned enterprises that rig the system in favor of China and Russia. This creates an uneven playing field for U.S. companies.

As the President has made clear, we will prioritize support, resources and aid for those who are our friends. And we call on our allies to follow our lead in strengthening their laws to better screen foreign investments in their countries for national security threats.

Third, America will respect the national independence and sovereignty of our allies. As President Trump has said, America will honor the right of every nation to pursue its own customs, beliefs, and traditions. For too long many in the West have touted international institutions without acknowledging that they derive their authority and legitimacy from the nation state. It is in the nation that democratic accountability resides.

America has a long tradition of supporting the right of nations to choose their own destiny. We fought for this right in 1917, defended it in World War II, based our Cold War strategy on it, and celebrated it in 1989. Indeed, America’s grand strategy against the Soviet Empire was predicated on the belief that nations are the unique repositories of legitimacy and liberty, and thus we ought to protect and nurture them. Eisenhower’s very term, “captive nation” reflects that fact. Historically, powerful democracies have stood for the rights of small nations, on grounds of both principle and interest, while large authoritarian powers have consistently opposed them.

Today it is the national sovereignty and territorial integrity of frontier states like Ukraine, Georgia, and even Belarus that offer the surest bulwark against Russian neo-imperialism. And it is the nation states of Europe that are role models of economic growth and will decide the future of Europe and its institutions.

The idea that a large, authoritarian power like Russia or China would become sincere champions of true national independence is unthinkable. Both operate on authoritarian geopolitical traditions antithetical to the freedom of nations. Our allies in Central Europe must not be under any illusions that these powers are their friends. The West must reclaim the tradition of supporting the nation state as its own and work harder to ensure that international institutions reflect the democratic will of nations, or expect institutions to lose influence and relevance.

A fourth and final principle is that America expects states to respect the rights of their neighbors. We reject Russia’s territorial aggression against its neighbor Ukraine and we reject China’s predatory debt mongering throughout Central and Eastern Europe. Neither of these authoritarian powers want relations with truly independent smaller states, much less allies. They want dependencies.

For NATO allies, our message is clear. America’s commitment to Article Five is ironclad. For non-NATO partners, our message is equally clear. We will support your God-given right to national independence. As Secretary Pompeo has made clear, we stand by Ukraine and Georgia, a fact that is demonstrated by the aid and arms we have made available to these states. As we have in past decades, America continues to help those who help themselves in the struggle for freedom.

Unlike our rivals, America does not seek dependencies. We seek strong allies and partners that are free, independent and confident states, willing and able to share the burden of Western defense. Only strong and confident allies will be able, in the words of the NATO Charter, to “safeguard the freedom, common heritage, and civilization of their peoples” in the era of competition that is unfolding before us. With strong allies, and supported by the love of freedom that is the West’s greatest legacy, we will once again prevail.