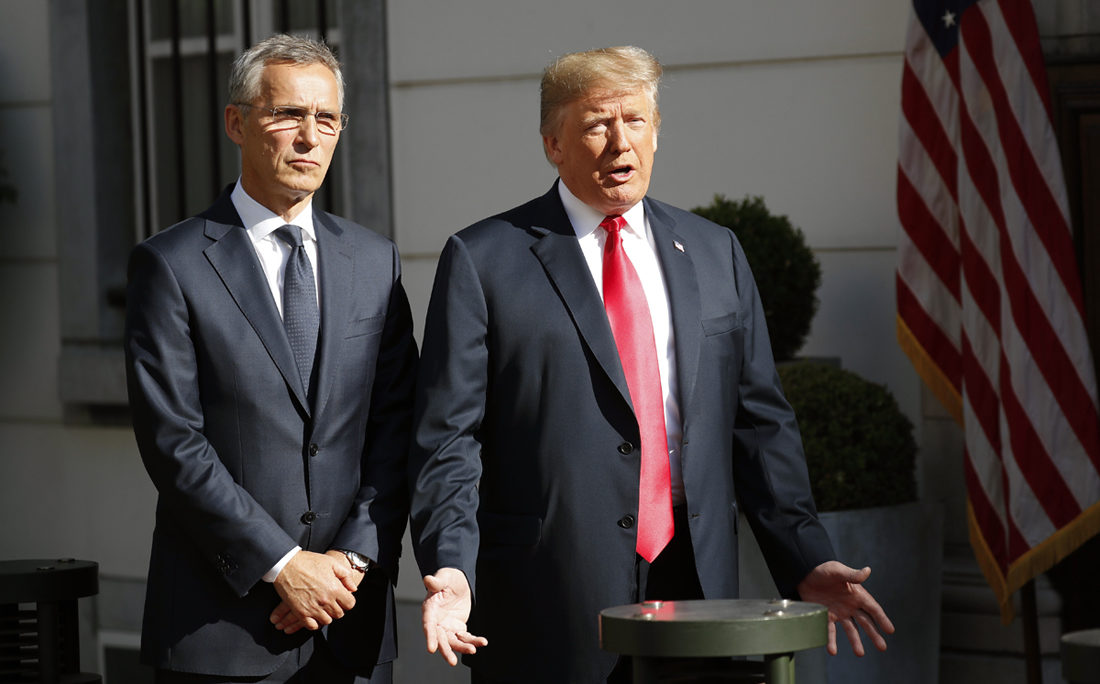 THE WHITE HOUSE
Office of the Press Secretary

PRESIDENT TRUMP:  Just look at the chart.  Take a look at the chart.  It’s public.  And many countries are not paying what they should.  And, frankly, many countries owe us a tremendous amount of money for many years back, where they’re delinquent, as far as I’m concerned, because the United States has had to pay for them.  So if you go back 10 or 20 years, you’ll just add it all up.  It’s massive amounts of money is owed.  The United States has paid and stepped up like nobody.  This has gone on for decades, by the way.  This has gone on for many Presidents.  But no other President brought it up like I bring it up.  So something has to be done, and the Secretary General has been working on it very hard.

You going to say something?

SECRETARY GENERAL STOLTENBERG:  First of all, it’s great to see you again, Mr. President.  And good to have you here for a summit.  And we are going to discuss many important issues at the summit.  Among them is defense spending.  And we all agree that we have to do more.  I agree with you that we have to do make sure that our allies are investing more.  The good news is that allies have started to invest more in defense.

After years of cutting defense budgets, they have started to add billions to their defense budgets.  And last year was the biggest increase in defense spending across Europe and Canada in that generation.

PRESIDENT TRUMP:  Why was that last year?

PRESIDENT TRUMP:  They won’t write that, but that’s okay.

SECRETARY GENERAL STOLTENBERG:  No, I have said it before, but the thing is that it really has.  And your message is having an impact, and we are going to build on that to make sure that we have further increases.  You initiated last year that all allies are going to develop national plans on how to spend more on defense.  And based on these national plans, we now estimate that European allies and Canada will add 266 extra U.S. dollars for defense from now until — billion U.S. dollars — until 2024.

So this is really adding some extra momentum.  It helps and we are moving in the right direction.  But we still have to do more, and that is what we’re going to address after the summit later on today.

Let me also add that a strong NATO is good for Europe and it’s also good for the United States.  The U.S. (inaudible) presence in Europe helps to protect Europe, but it also helps the United States project power to the Middle East, to Africa.  And I think also that clout — the military clout of Europe, economic clout, the political clout — also is helpful dealing with Russia.  And we look forward to the meeting you’re going to have with President Putin.  And I think that leaders are also looking forward to your thoughts about the meeting with President Putin later on.

So we’re protect you against Russia, but they’re paying billions of dollars to Russia, and I think that’s very inappropriate.  And the former Chancellor of Germany is the head of the pipeline company that’s supplying the gas.  Ultimately, Germany will have almost 70 percent of their country controlled by Russia with natural gas.

So you tell me, is that appropriate?  I mean, I’ve been complaining about this from the time I got in.  It should have never been allowed to have happened.  But Germany is totally controlled by Russia, because they will be getting from 60 to 70 percent of their energy from Russia and a new pipeline.  And you tell me if that’s appropriate, because I think it’s not, and I think it’s a very bad thing for NATO and I don’t think it should have happened.  And I think we have to talk to Germany about it.

On top of that, Germany is just paying a little bit over 1 percent, whereas the United States, in actual numbers, is paying 4.2 percent of a much larger GDP.  So I think that’s inappropriate also.  You know, we’re protecting Germany, we’re protecting France.  We’re protecting everybody.  And yet we’re paying a lot of money to protect.

But I have to bring it up, because I think it’s very unfair to our country.  It’s very unfair to our taxpayer.  And I think that these countries have to step it up not over a 10-year period; they have to step it up immediately.  Germany is a rich country.  They talk about they’re going to increase it a tiny bit by 2030.  Well, they could increase it immediately tomorrow and have no problem.  I don’t think it’s fair to the United States.

So we have to talk about the billions and billions of dollars that’s being paid to the country that we’re supposed to be protecting you against.  You know, everybody is talking about it all over the world.  They’ll say, well, wait a minute, we’re supposed to be protecting you from Russia, but why are you paying billions of dollars to Russia for energy?  Why are countries in NATO, namely Germany, having a large percentage of their energy needs paid to Russia and taken care of by Russia?

Now, if you look at it, Germany is a captive of Russia because they supply.  They got rid of their coal plants.  They got rid of their nuclear.  They’re getting so much of the oil and gas from Russia.  I think it’s something that NATO has to look at.  I think it’s very inappropriate.  You and I agree that it’s inappropriate.  I don’t know what you can do about it now, but it certainly doesn’t seem to make sense that they paid billions of dollars to Russia and now we have to defend them against Russia.

SECRETARY GENERAL STOLTENBERG:  You know, NATO is an alliance of 29 nations, and there are sometimes differences and different views, and also some disagreements.  And the gas pipeline from Russia to Germany is one issue where allies disagree.  But the strength of NATO is that despite these differences, we have always been able to unite around our core task, to protect and defend each other, because we understand that we are stronger together than apart.

I think that two World Wars and the Cold War taught us that we are stronger together than apart.

SECRETARY GENERAL STOLTENBERG:  Because we understand that when we stand together, also in dealing with Russia, we are stronger.  I think what we have seen is that —

SECRETARY GENERAL STOLTENBERG:  Well, I think that even during the Cold War, NATO Allies were trading with Russia, and then there have been disagreements about what kind of trade arrangements we should (inaudible).

PRESIDENT TRUMP:  I think trade is wonderful.  I think energy is a whole different story.  I think energy is a much different story than normal trade.  And you have a country like Poland that won’t accept the gas.  You take a look at some of the countries — they won’t accept it, because they don’t want to be captive to Russia.  But Germany, as far as I’m concerned, is captive to Russia, because it’s getting so much of its energy from Russia.  So we’re supposed to protect Germany, but they’re getting their energy from Russia.  Explain that.  And it can’t be explained — you know that.

Q    What are the consequences if they don’t spend more, Mr. President?

Q    Mr. President, does something have to change on trade for you to keep your troop levels in Europe?

PRESIDENT TRUMP:  I have great confidence that they will be spending more money, as they should be.

PRESIDENT TRUMP:  It’s a shame they made that deal.  Too bad.  It’s too bad.  Thank you.