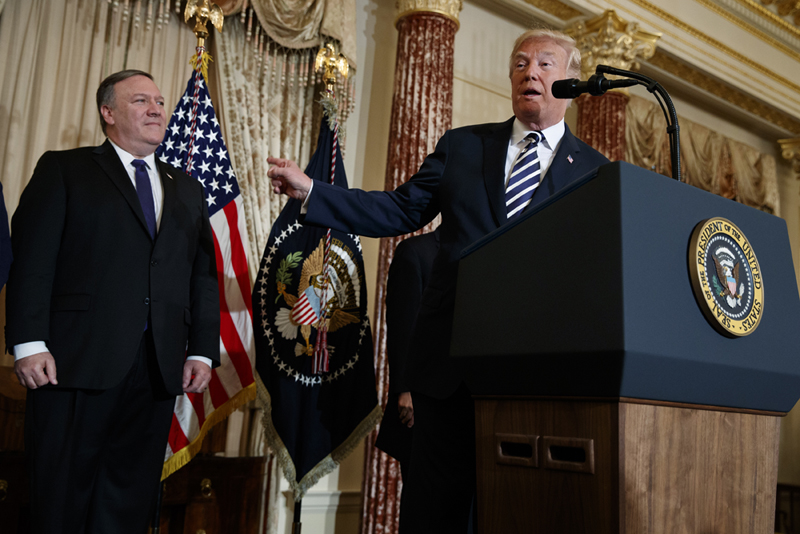 President Donald Trump speaks during a ceremonial swearing in for Secretary of State Mike Pompeo at the State Department, Wednesday, May 2, 2018, in Washington. (AP Photo/Evan Vucci)

THE WHITE HOUSE
Office of the Press Secretary
For Immediate Release
May 2, 2018

THE PRESIDENT:  Thank you.  I must say, that’s more spirit that I’ve heard from the State Department in a long time — many years.  (Laughter.)  We can say many years, and maybe many decades.  It’s going to be a fantastic start, a fantastic day.  And that spirit will only be magnified, will only — with this man right here.  I know that for a fact.

So thank you all for being here.  It’s great to be with you, the extraordinary men and women of the State Department.  We are profoundly grateful for everything you do for our country.  And you’ll be doing things that you don’t even know about.  (Laughter.)  Right now, they’re not even a glimmer in your eye.  And we have a couple going, Mike, right now, that a lot of people don’t know about that are very, very encouraging.

I also want to thank Vice President Pence and the many members of my Cabinet for joining us this morning.

We’re here to celebrate the swearing-in of America’s new Secretary of State, Mike Pompeo.  Mike.  (Applause.)  This day is a testament to your exceptional skill, Mike — a skill and service that’s been honed over a lifetime, no matter where you went.

We’re joined by Mike’s wife, Susan, and his son, Nick.  And I want to thank you both for sharing this wonderful moment with us all.  Thank you very much.  Thank you.  (Applause.)

Mike is a true American patriot.  He has devoted many years of his life to defending America, beginning when he entered West Point.  And as you all heard, he entered at 18 and he ended up graduating first in his class.  You know, I heard that rumor a long time ago.  I thought it was a rumor of — I don’t know.  You know, you hear “first.”  (Laughter)  And I’ve heard it so many times.  I’ve also heard I was first in my class at the Wharton School of Finance.  (Laughter.)  And sometimes when you hear it, you don’t say anything.  You just let it go.  (Laughter.)

But I heard it with him.  And being first in your class at West Point — because I know, that’s a big deal.  So I said, “Is that true?”  “Yeah.”  I asked a few other people, “Is that true?”  “Yes.”  So I started bringing it up.  I brought it up about four weeks ago, right David?  And after that, everybody brings it up.  So I don’t have to say it anymore.  (Laughter.)  He was actually first in his class at West Point.

And soon he was deployed to Germany, where he served a cavalry officer prior to the fall of the Berlin Wall.  After leaving active duty service, Mike graduated from Harvard Law School with high honors.  Great student.

Mike was elected to Congress in 2010 by the people of the 4th District of a great state: Kansas.  Right?  (Applause.)  It is.  In the House, he distinguished himself as a member of the Intelligence Committee.

For the last 15 months, Mike served as our nation — and served our nation as the Director of the Central Intelligence Agency, where, I can tell you, they have such respect for him.  It’s unbelievable.  They may be the only people that are not very happy right now.  But they’ll be happy.  (Laughter.)  They’ll be happy with our Gina, who’s here today.  And his exceptional leadership of the CIA earned the admiration of his colleagues in the Cabinet, the Congress, the intelligence community, as well as our foreign allies and partners.

Mike has also earned my deepest respect and admiration and trust.  And you’ll see why over the coming years.  Probably, over the coming months.  I have absolute confidence that he will do an incredible job as the nation’s 70th Secretary of State.

As Mike travels the world, he will carry out the greatest mission and highest duty of the State Department, to represent the interests of the American people.

This mission includes overseeing more than 13,000 Foreign Service Officers, who act as our representatives to the world; 12,000 Consular Officers; and an administrator of just an incredible immigration system — system that we’re going to be changing and fixing and making better; a system that’s under siege right now.  But a system that will in fact, hopefully, be the talk of the world by the time we finish.

We have 3,500 security personnel, and thousands more diplomats, embassy staff, civil servants, and administrative personnel, all of whom collectively play a vital role in advancing the safety, liberty, prosperity, and all good things of the United States.  Very important people.  Great people.

As President Eisenhower said in 1953, “Make no mistake, the reason we have representatives around the world is to protect American interests.”  For nearly 230 years, the men and women of the United States State Department have skillfully and proudly answered this call.

And now, at this moment in time, I can think of no better person to lead these dedicated public servants than our new Secretary of State, Mike Pompeo.

Secretary Pompeo, congratulations again.  I have no doubt that you will make America proud as our nation’s chief diplomat.  You’re an exceptional guy, a great friend, and somebody that truly loves our country.  We are really, really proud of you.  I speak on behalf of everybody in this room, and also on behalf of your family.

Thank you very much, Mike.  And congratulations.  (Applause.)

And now I’d now like to ask Vice President Pence to administer the oath of office.  Thank you.

(The oath is administered.)  (Applause.)