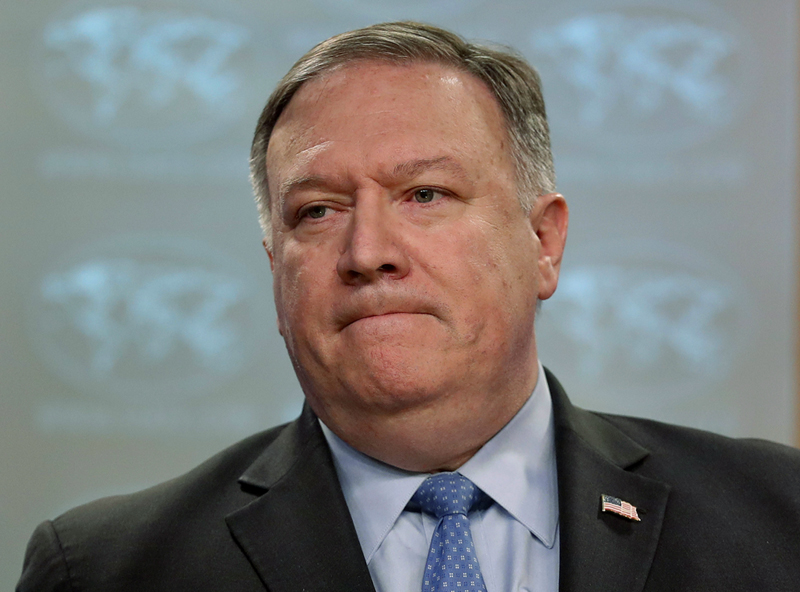 SECRETARY POMPEO: Good afternoon, everyone. Happy Thanksgiving.I want to touch on five topics today. First, the United States today sanctioned an international network that the Iranian regime and Russia are using to provide millions of barrels of oil to the Assad regime. This is in exchange for the movement of hundreds of millions of dollars to the IRGC Quds Force. That money is then passed on to terrorist organizations like Hizballah and Hamas. The United States in its continued efforts will not allow these dirty dealings to flourish. Iran will not be allowed to exploit the international financial system, to hide revenue streams it uses to fund terrorist activity, support sectarian militias, abusing civilian populations, or to destabilize the region.

Second, you’ve seen that Interpol is electing a new president. It’s an important organization. We strongly endorse Kim Jong Yang, who is serving as its acting president. We encourage all nations and organizations that are part of Interpol and that respect the rule of law to choose a leader with credibility and integrity that reflects one of the world’s most critical law enforcement bodies. We believe Mr. Kim will be just that.

Third, our Special Representative for Afghanistan Reconciliation Zalmay Khalilzad just got back from his trip to Afghanistan, the UAE, and Qatar. Ambassador Khalilzad’s first and last stop was Kabul, where he met with President Ghani, Chief Executive Abdullah, and other Afghan stakeholders to facilitate a peace process between the Government of Afghanistan and the Taliban. During this visit to Kabul, Ambassador Khalilzad met with men and women active in Afghan civil society and peace efforts, members of the media, and other governmental and nongovernmental organizations. In every one of his meetings, Ambassador Khalilzad stressed that all Afghans must have a say in creating a sustainable peace for Afghanistan. We will continue to work with all interested parties to support and facilitate an inclusive peace process.

Fourth, our Special Representative for North Korea Steve Biegun is meeting today with his Republic of Korea counterpart to further strengthen our close coordination on efforts to achieve our shared goal of the final, fully verified denuclearization, as agreed to by Chairman Kim. These are important discussions today with the Republic of Korea. They are discussing ongoing diplomatic efforts, our sustained implementation of UN sanctions, and the inter-Korean cooperation.

And finally, I just left a meeting with Turkish Foreign Minister Cavusoglu today. I welcomed the positive momentum in our relationship following the release of Pastor Brunson and urged reopening additional channels to address issues of mutual concern. We are still greatly concerned about Turkey’s continued unjust detention of U.S. locally employed staff and citizens, including NASA scientist Serkan Golge. We also discussed the Khashoggi case and the need to work together to de-escalate conflict in Syria, support the reinvigoration of the UN-led peace process, and achieve a peaceful, lasting solution to the Syrian conflict.

With that, I’m happy to take a few questions.

QUESTION: Sure. Mr. Secretary, one of the things that the President points to in his statement is a $110 billion arms initiative. But by the State Department’s own record in October, only 14.5 billion has come through. When do you expect to see the rest of the money from that arms agreement?

SECRETARY POMPEO: Some of these contracts, defense contracts in particular, are complex, lengthy contract negotiations. We are working diligently on the remainder of those. We actually hope that number will end up being even greater. I couldn’t tell you when those negotiations will conclude, but we are very hopeful that each of those commitments that the Kingdom of Saudi Arabia made to the United States to purchase equipment will be completed in a timely fashion.

QUESTION: Yes, and thank you so much. Mr. Secretary, based on the President’s statement, moving forward, the relations with Saudi Arabia won’t be affected by the killing of Jamal Khashoggi? And how can you differentiate between the kingdom and the crown prince?

SECRETARY POMPEO: Yeah. So it’s a mean, nasty world out there, the Middle East in particular. There are important American interests, to keep the American people safe, to protect Americans – not only Americans who are here, but Americans who are traveling and working, doing business in the Middle East. It is the President’s obligation – indeed, the State Department’s duty as well – to ensure that we adopt policies that further America’s national security.

By the way, this is a long, historic commitment, and one that is absolutely vital to America’s national security. We are determined to ensure that we continue to make sure that we take care of the American people in all of the strategic decisions we make about with whom we work around the world.

QUESTION: So one quick follow-up on that, and then a question on Iran. So does the “America first” agenda mean putting U.S. business interests ahead of human rights concerns? And then on Iran, have you considered any specific actions, specific sanctions, to pressure Iran to release the American citizens who are held there?

SECRETARY POMPEO: We are engaged every day, literally every day, in working to return every U.S. citizen who is either wrongfully detained or a hostage somewhere around the world. That certainly includes Bob Levinson and all those that are being held by the Iranian regime. We are determined to get them back. As President Trump has made very clear, we’re not going to pay a price for their return, but we are prepared to work with all those who can assist us in getting those Americans returned to their families and returned here to our country.

Your other question is best answered by talking about what we have already done. There has been an enormous effort with respect to fact-finding pertaining to the death, the murder, of Jamal Khashoggi. A lot of U.S. resources have been devoted to determining the facts to the best of our ability to determine precisely what happened there.

The United States took a very strong response. We have sanctioned 17 individuals in connection with that investigation. We are at the same time committed to making sure that we place America’s national security interests and all the actions that take place in the context of doing the right thing to make sure that America continues to thrive and grow. And when we do that, the world is better off for it too, and the Middle East is better off as well.

QUESTION: Yeah, you mentioned Steve Biegun’s meeting with his South Korean counterpart. I just wanted to ask: What’s the message he’s going to be sending as far as what the U.S. Government would like to see the South Korean Government do as far as coordinating their inter-Korean efforts and the denuclearization efforts?

SECRETARY POMPEO: So I think there’s complete agreement between the South Koreans and us with respect to how this should proceed. We now have a working group that formalizes those processes so that we can be sure that we don’t talk past each other, that we don’t take an action or the South Koreans don’t take an action that the other is unaware of or hasn’t had a chance to comment on or provide their thoughts. And that’s the purpose of the working group that’s being led on our side by Stephen Biegun.

We have made clear to the Republic of Korea that we do want to make sure that peace on the peninsula and the denuclearization of North Korea aren’t lagging behind the increase in the amount of inter-relationship between the two Koreas. We view them as tandem, as moving forward together. We view them as important parallel processes, and that working group is designed to make sure they continue to remain that way.

QUESTION: Hi. Secretary Pompeo, you mentioned you’re gathering all these facts. Does the President’s statement today mean that that fact-finding segment is over, and have you seen the assessment he is expected to get today?

SECRETARY POMPEO: I can’t comment on intelligence matters. I’d direct you to the – to the DNI Director Coats or to the CIA to talk about particular intelligence issues. Facts will obviously still continue to come to light. I’m confident of that. It’s the way the world works.

QUESTION: And as these facts come to light, will you pursue further actions against whoever, even if it does show culpability of —

SECRETARY POMPEO: We have been unambiguous with respect to how we have treated the data set that we have been able to get. When America has the information it needs, it will, of course, do the right thing to protect American interests. And we have done so every time.

MS NAUERT: Thank you, everybody.