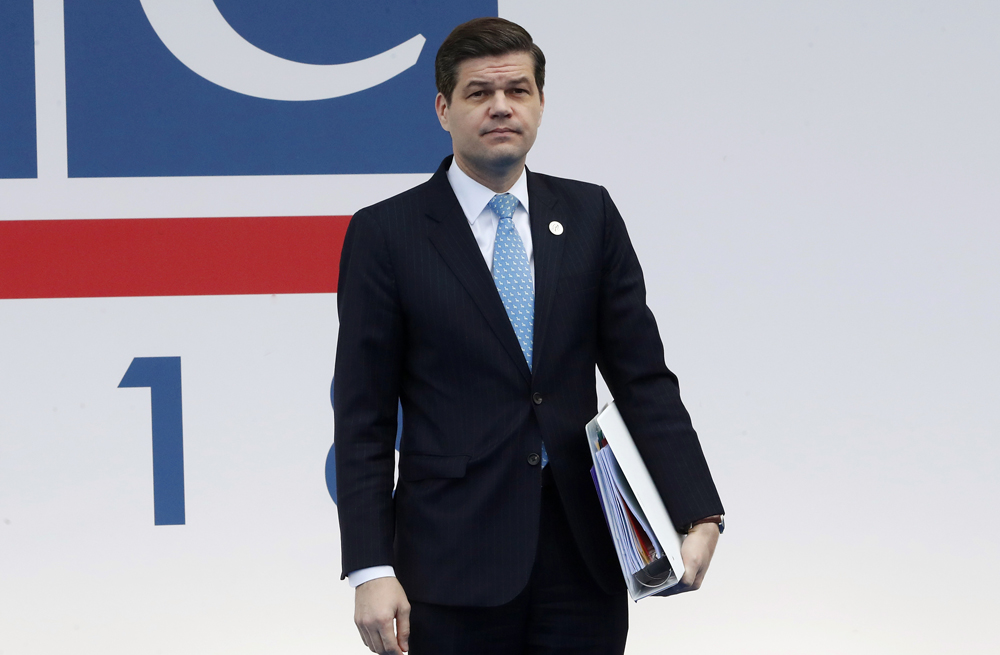 Remarks at the Ukraine-Hosted Side Event at the 2018 OSCE Ministerial Council on Russian Aggression in Crimea, the Kerch Strait, and the Sea of Azov

Thank you, Pavlo, for organizing this important event.

The past four years of Russian aggression against Ukraine I think have been a wake-up call for all of us. If ever in the OSCE’s history there were a reason for its existence, it’s today, in Ukraine. Recent events in the Black Sea and Sea of Azov should give us all a new sense of urgency.

Russia’s unprovoked attack on Ukrainian naval vessels in the Black Sea near the Kerch Strait is a dangerous escalation. Russia’s aim is to debase Ukraine’s sovereignty and negate its territorial integrity. Russia’s aggression includes its self-described annexation of Crimea. The world pays far too little attention to the abuses occurring every day against countless Ukrainian civilians in Crimea and Donbas. Altogether, this conflict has so far taken the lives of more than ten thousand people. This has happened in the 21st century, at the height of the modern era, in full view of international institutions like the OSCE.

Russia’s blocking of the Kerch Strait on November 25 constitutes an unambiguous violation of international law. Europe and America must respond firmly to Russia’s latest unjustified and unprovoked attack on a European state.

The United States calls on Russia to immediately release the 24 captured Ukrainian crew members and the three vessels it has unlawfully seized, and to keep the Kerch Strait open to vessels transiting to and from Ukrainian ports. Russia has reportedly charged the crew members with illegally crossing Russia’s maritime border.

In reality, Russia has violated international law by blocking the Kerch Strait and then launched an unprovoked attack as the three Ukrainian vessels attempted to withdraw to their home port in Odessa. Ukrainians chose not to return fire. This is not a situation in which both sides are to blame. One party is to blame and that is Russia.

The United States’ response to Russian aggression has been firm. As Russia has ramped up its aggressive activities in the Sea of Azov over the past several months, the United States transferred two Coast Guard vessels to Ukraine to enhance its maritime security. We conducted the Sea Breeze naval exercise with Ukraine in conjunction with NATO Allies and issued multiple statements condemning Russian illegal maritime actions. We have also committed to maintaining sanctions against Russia for its aggression in eastern Ukraine and attempted annexation of Crimea. We have raised concerns about Russia’s action in the Sea of Azov on numerous occasions at the OSCE Permanent Council in the months leading up to the latest incident.

As Secretary Pompeo stated in his July 25 Crimea Declaration, we will never recognize Russia’s attempted annexation of Ukrainian territory. We will continue to impose costs for Russian aggression. We urge our European allies to show vigilance, unity, and moral clarity in the face of this latest aggression.

The United States encourages the OSCE to enable the OSCE Special Monitoring Mission to increase reporting on the Sea of Azov and Kerch Strait. This effort can begin immediately and without a change to the SMM’s mandate. If, as the Russian Federation claims, its attacks on the retreating Ukrainian vessels off the coast of Ukrainian Crimea were somehow “provoked” by Ukraine, it should follow that the Russian Federation would support increasing the OSCE’s ability to monitor activities in and around the Kerch Strait.

The United States encourages the OSCE to confront the polite fiction at the heart of this institution that allows Russia to attack fellow OSCE member states, kill their civilians, shoot down SMM drones, deny SMM access to Crimea, and hold habitual snap exercises while impeding normal OSCE business, paying a paltry 4 percent of the budget of this organization, and claiming to be an OSCE participating State in good standing. The OSCE must confront this reality or expect to lose relevance in the 21st century.

Russia’s aggression near the Kerch Strait was a miscalculation. It has strengthened Western resolve to maintain sanctions against Russia and has galvanized the international community’s efforts to ensure respect for international law and lawful maritime passage.

By continuing on this path of aggression, Russia only further isolates itself and reduces the possibility of a better future for itself and its neighbors. It is time for Russia to rethink this approach, respect international law, and fulfill its commitments as an OSCE state and would-be member of the community of civilized nations.