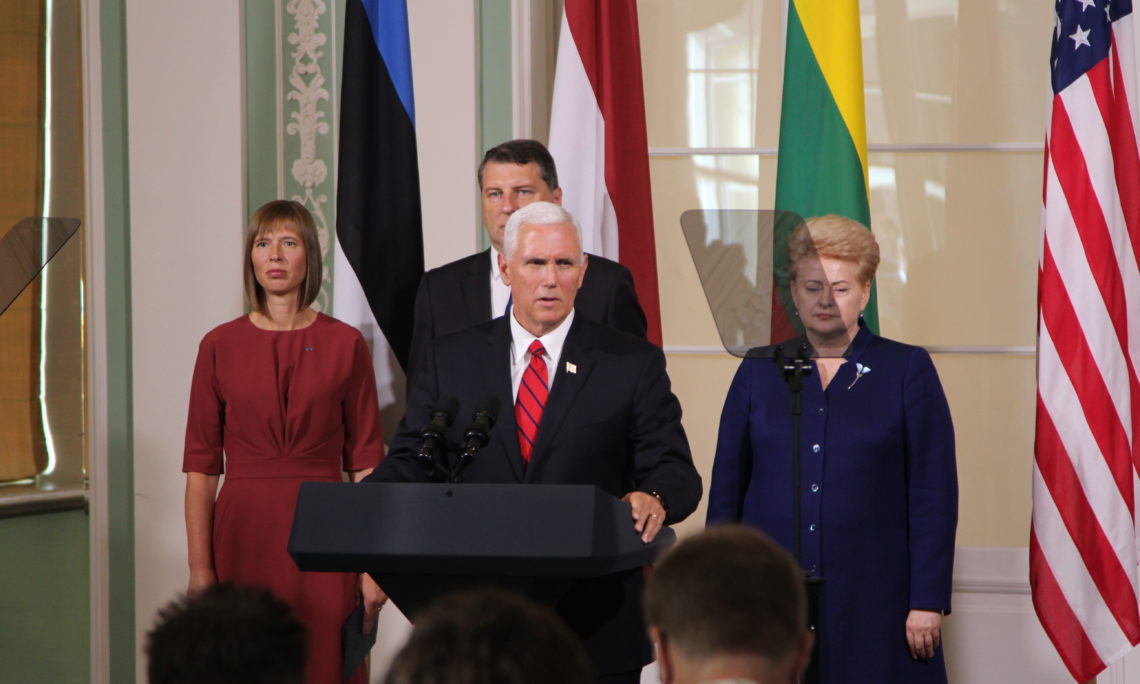 Office of the Vice President

AT A JOINT PRESS AVAILABILITY WITH BALTIC LEADERS

President Kaljulaid, thank you for your warm welcome and the hospitality you have shown to me and my family.  And to you, to President Vējonis, and, to President Grybauskaitė, it is an honor to be with you today with the leaders of the Baltic States.

And it’s my great privilege to be here today to bring a very simple message from the President of the United States of America, President Donald Trump.

President Trump sent me here to:  We are with you.  We stand with the people and nations of Estonia, Latvia, and Lithuania — and we always will.

Next year marks the 100th anniversary of the birth of freedom for all three of your nations, but for most of this past century, you had to fight to reclaim your independence and your sacred birthright of liberty.

The United States proudly stood with you as you labored under Communist occupation.  Through all the decades, we refused to recognize the Baltic States as part of the Soviet Union.

When you raised your voices in the Singing Revolution, we joined the chorus from afar for liberty.  When you joined your hands in the Baltic Way, we reached out from across the world.

And the people of the United States believed, with you, that the Baltic States would one day reclaim your rightful place among the community of free and sovereign nations — and so you did.

Today, you have achieved that goal — and more — by acceding to the European Union and the North Atlantic Treaty Organization.

It’s a particular honor to be here in Estonia with the advent of your presidency of the Council of the European Union.  The United States joined you in your call, in your leadership role in the EU for stronger internal security and external borders, a more robust partnership between the EU and NATO, and increased European defense spending.

And as I told these three Presidents, President Trump and I applaud each of their unwavering commitment to our NATO Alliance.

Estonia is one of only five nations to meet its obligation to spend a minimum of 2 percent of their gross domestic product on defense; and Latvia and Lithuania, I’m pleased to note, will meet this goal by the end of 2018.

The Baltic States are leading by example but are also contributing mightily to international security.

You’re members of the Global Campaign to Defeat ISIS, and at this moment I say with gratitude, all three of your nations are participating in NATO’s Resolute Support mission in Afghanistan.  The people of the United States thank you and your people, and we mourn for the 14 Estonian, Latvian, and Lithuanian heroes who have given their lives in the cause of freedom.

In just a few short hours, the four of us will meet with members of the Armed Forces of the United States, Estonia, the United Kingdom, and France — all of whom stand guard in this region through NATO’s Enhanced Forward Presence initiative.

We stand together, here and across the world, because we know that a strong and united NATO is more necessary today than at any point since the collapse of communism a quarter-century ago.  And no threat looms larger in the Baltic States than the specter of aggression from your unpredictable neighbor to the east.

At this very moment, Russia continues to seek to redraw international borders by force, undermine democracies of sovereign nations, and divide the free nations of Europe — one against another.

Under President Donald Trump, the United States of America rejects any attempt to use force, threats, intimidation, or malign influence in the Baltic States or against any of our treaty allies.

To be clear:  We hope for better days, for better relations with Russia, but recent diplomatic action taken by Moscow will not deter the commitment of the United States of America to our security, the security of our allies, and the security of freedom-loving nations around the world.

Under President Donald Trump, the United States stands firmly behind our Article 5 pledge of mutual defense, and an attack on one of us is an attack on us all.

President Trump also knows that security is the foundation of our prosperity, and the United States and our Baltic allies, as we discussed today, will continue to seek new and renewed ways to contribute to each other’s prosperity.  Our two-way trade in goods already totals more than $3.5 billion, our combined investment in each other’s economies is nearly $300 million.

But as the four of us discussed, we have many ways to expand our economic ties, and we’ll pursue them.  Here in Estonia, there is a thriving start-up culture that reminds me of America; and across the region, the opportunities for greater trade and investment are almost too numerous to count.

The President and I were pleased to see a Lithuanian firm’s recent decision to purchase liquefied natural gas from the United States.  And when the first delivery occurs next month, it will benefit not only our prosperity, but it will contribute to regional security and stability.  And I’m confident that this deal will only be the first of many.

Today, the bond between the United States and the Baltic States of Estonia, Latvia, and Lithuania is strong — and under President Trump, and with the leaders gathered here, I know our bond will only grow stronger as time goes on.