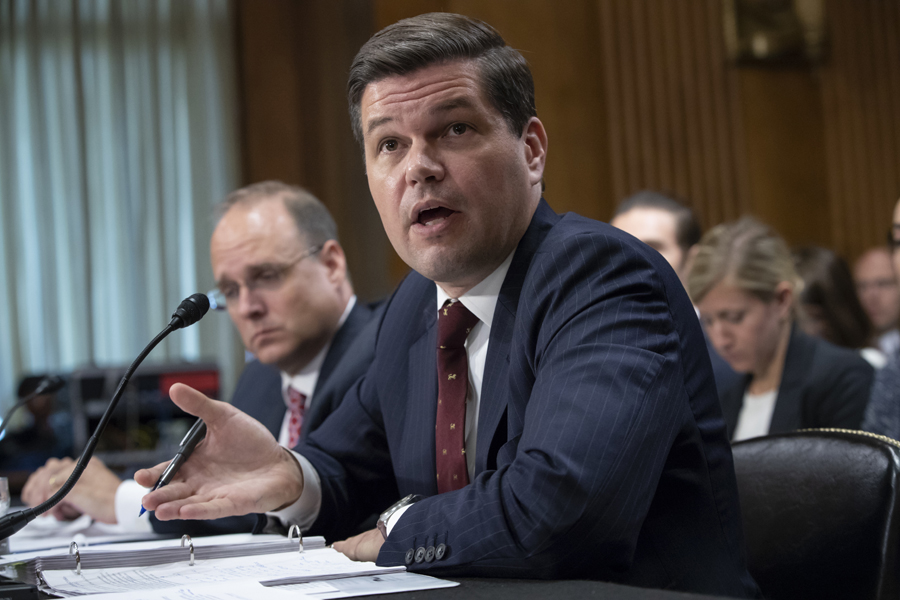 A. Wess Mitchell, assistant secretary of State for European and Eurasian Affairs and Marshall Billingslea, assistant Treasury secretary for terrorist financing, left, testify as the Senate Committee on Foreign Relations holds a hearing on relations between U.S. and Russia on Capitol Hill in Washingt

Chairman Corker, Ranking Member Menendez, thank you for inviting me to testify today. If you’ll indulge me, I want to start with a piece of welcome news, it’s unrelated to this morning’s testimony. Yesterday, August 20th, the U.S. government removed to Germany, Jakiw Palij, a former Nazi camp guard at the notorious, Trawniki slave labor camp for Jews in Nazi-occupied Poland. While this process took far longer than we wanted, the removal of this individual can bring some comfort to Holocaust survivors and others who suffered at the hands of those, like Palij, who did the cruel bidding of the inhuman Nazi regime.

I will use my prepared comments today to outline in brief form, the overarching strategy of the United States towards the Russian Federation. The foundation for this strategy is provided by three documents, as directed and approved by the President: the National Security Strategy, the National Defense Strategy, and the Russia Integrated Strategy.

The starting point of the National Security Strategy is the recognition that America has entered a period of big-power competition and that past U.S. policies have neither sufficiently grasped the scope of this emerging trend nor adequately equipped our nation to succeed in it. The central aim of the administration’s foreign policy is to prepare our nation to confront this challenge by systematically strengthening the military, economic and political fundaments of American power.

Our Russia policy proceeds from the recognition that, to be effective, U.S. diplomacy must be backed by “military power that is second to none and fully integrated with our allies and all of our instruments of power.” To that end, we have reversed years of cuts to the defense budget, begun the process of recapitalizing the U.S. nuclear arsenal, requested close to $11 billion for the European Deterrence Initiative, and worked within NATO to bring about more than $40 billion in new European defense spending. At the NATO Summit, we established two new NATO Commands (including one here in the United States), new counter-hybrid threat response teams, and major, multi-year initiatives to bolster the mobility, readiness, and capability of the Alliance.

In tandem, we have worked to degrade Vladimir Putin’s ability to conduct aggression by imposing costs on the Russian state and the oligarchy that sustains it. Building on Secretary Pompeo’s testimony, I am submitting for the record a list of actions this administration has taken. These include, to date: 217 individuals and entities sanctioned, 6 diplomatic and consular facilities closed and 60 spies removed from American soil.

Our actions are having an impact. Research by the State Department’s Office of the Chief Economist shows that on average sanctioned Russian firms see their operating revenue fall by a quarter; their total asset valuation fall by half; and they are forced to fire a third of their employees. Following the announcement of sanctions in April, the Russian company, Rusal, lost about fifty percent of its market value. In the five days following our August 8 announcement of Chemical and Biological Weapons Act sanctions, the ruble depreciated to its lowest level against the dollar in two years.

Even as we have imposed unprecedented penalties for Russian aggression, we have been clear that the door to dialogue is open, should Putin choose to take credible steps toward a constructive path. In Syria, we created de-escalation channels to avoid collisions between our forces. In Ukraine, we have maintained an effort under Ambassador Kurt Volker to provide the means by which Russia can live up to its commitments under the Minsk Agreements. But in all of these areas, it is up to Russia, not America, to take the next step.

We have placed particular emphasis on bolstering the states of frontline Europe. In Ukraine and Georgia, we lifted restrictions on the acquisition of defensive weapons. In the Balkans, we have played a hands-on role in resolving the Greece-Macedonia name dispute and engaging with Serbia and Kosovo to propel the EU-led dialogue. From the Caucasus to Central Europe we are promoting energy diversification, fighting corruption, and competing for hearts and minds.

Our strategy is animated by the realization that the threat from Russia has evolved beyond being simply an external or military one; it includes influence operations orchestrated by the Kremlin in the very heart of the Western world. These activities are extensively resourced and directed from the highest levels of the Russian state.

It’s important to state clearly what these campaigns are and are not about.

What they’re not about is a particular attachment to U.S. domestic political causes. They are not about right or left, not about American political philosophy. As the recent Facebook purges reveal, the Russian state has promoted fringe voices on the political left and right, including groups who advocate violence, the storming of federal buildings, and the overthrow of the U.S. government. Russia foments and funds controversial causes – and then foments and funds the causes opposed to those causes. Putin’s thesis is that the American Constitution is an experiment that will fail if it is challenged in the right way from within. Putin wants to break apart the American Republic, not by influencing an election or two, but by systematically inflaming the fault-lines within our society. Accepting this fact is absolutely essential for developing a long-term response to the problem. The most dangerous thing in the world we could do is to politicize the challenge, which in itself would be a gift to Putin.

What Russian efforts are about is geopolitics: the Putinist system’s permanent and self-justifying struggle for international dominance. As stated by a handbook of the Russian Armed Forces, the goal is “to carry out mass psychological campaigns against the population of a state in order to destabilize society and the government; and force that state to make decisions in the interests of its opponents.” Doing so involves an evolved toolkit of subversive statecraft first employed by the Bolshevik and later the Soviet state, upgraded for the digital age.

The State Department takes this threat very seriously. Countering it in both overt and covert form is among the highest priorities of the Bureau of European and Eurasian Affairs. As a co-chair of the Russia Influence Group, I work with General Scapparotti to bring the combined resources of EUR and EUCOM to bear against this problem. Under EUR leadership, all 49 U.S. missions located in Europe and Eurasia are required to develop, coordinate, and execute tailored action plans for rebuffing Russian influence operations in their host countries.

Within the Bureau, we recruited one of the architects of the Global Engagement Center legislation from the staff of a member of this committee; we formed a new position – the Senior Advisor for Russian Malign Activities and Trends (or, SARMAT) – to develop cross-regional strategies across offices. EUR created a dedicated team to take the offensive in publicly exposing Russian malign activities, which since January of this year has called out the Kremlin on 112 occasions. We are now working with our ally, the UK, to form an international coalition for coordinating efforts in this field and have requested over $380 million in security and economic assistance accounts in the President’s 2019 budget.

We recognize that Congress has an important role to play in providing the tools and resources needed to deal effectively with the Russian problem set. As Secretary Pompeo made clear in his recent testimony, we are committed to working with all of you to make headway against this problem and align our efforts in support of the President’s Russia strategy.

Mr. Chairman, thank you again for inviting me today. I look forward to your questions.