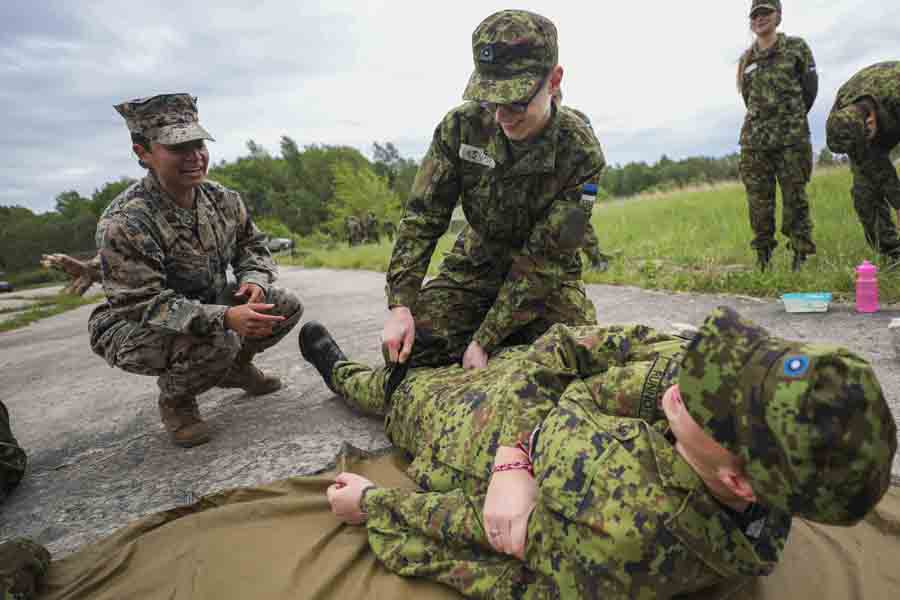 U.S. Marines arrived in Tallinn May 25 ahead of the 47th annual maritime exercise Baltic Operations (BALTOPS). These service members will visit local schools and take part in community engagements across Estonia, giving demonstrations in first aid, orienteering, and teamwork. BALTOPS is an annual NATO exercise that has been conducted in the region since 1971. This year it will take place in Sweden, Lithuania, Latvia, and Estonia from June 9-21 with 18 nations engaging, including the United States.
The visiting Marines began their tour of Estonia in Tallinn by taking young people from a local youth center on a day excursion and picnic at a nearby nature trail over the weekend. On Tuesday, they joined with the Estonian Defense League and civil defense students in Läänemaa for an overnight camp, where they shared some tips on land navigation, combat medicine, and camouflage techniques with the students.

The team’s next stops will be in Tartu and Narva, where they will lead demonstrations on basic survival, self-defense, military leadership, and first aid for schools, Scouts and Guides, and attendees at the Narva Youth Festival. On Saturday, they will cheer on participants at the Narva Soap Box Derby, including a U.S. military team competing in the race. Afterwards, they look forward to promoting a healthy lifestyle at Family Day, where they can give demonstrations of the physical training Marines use to stay in shape.
The U.S. has provided more than $100 million in combined security assistance to Estonia over the last several years, and conducts nearly 150 military-to-military engagements per year, with over 60 of those involving U.S. personnel in Estonia.  These community engagements led by the Marines demonstrate America’s ongoing partnership not just with Estonia’s military but with its people as well.